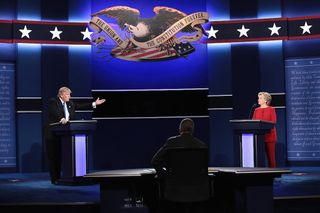 The most tweeted-about line of the night, according to The Hollywood Reporter, was Trump saying, "I think my strongest asset, maybe by far, is my temperament. I have a winning temperament. I know how to win. She does not."

Later, Clinton said that some of Trump's foreign-policy statements revealed a person without the right temperament to be commander in chief. [The 5 Strangest Presidential Elections in US History]

Merriam-Webster's dictionary defines "temperament" as "the usual attitude, mood or behavior of a person or animal," but psychologists use the term a little more specifically. In 1981, psychologists Mary Rothbart and Douglas Derryberry defined the term as "individual differences in reactivity and self-regulation assumed to have a constitutional basis." By "constitutional," the researchers meant that these differences are based in the "relatively enduring" biology of the person, and are influenced by genetics, they wrote in the Journal of Personality and Social Psychology in 2000.

Despite this rather permanent view of temperament, Rothbart and her colleagues soon discovered that their original global approach didn't always pan out. In the first studies of infant temperament, for example, the researchers tried to find out if some babies might be more intense than others in all of their reactions and behaviors. It didn't work out that way, the researchers wrote in their 2000 article. A baby who tended to laugh and smile easily and intensely did not necessarily get intensely frustrated as well, the scientists found.

Nevertheless, the researchers were able to discover aspects of temperament that are more stable, such as level of activity and the ability to maintain attention. Following children from infancy to age 7, they found that fearfulness in infancy predicts fearfulness in childhood; positive anticipation, or excitement about upcoming activities, also remained stable over time. [10 Things You Didn't Know About You]

In last night's debate, Clinton and Trump seemed to use the word "temperament" almost interchangeably with the concept of personality. In psychology, however, personality is defined as individual differences in patterns of thinking, feeling and behaving, according to the American Psychological Association. Unlike temperament, psychological traits don't necessarily have to be innate. Personality emerges from the interaction of temperament and life experiences. The boundaries between the concept of inborn traits and traits that are developed as a result of the environment are fuzzy, though.

Temperament is more likely to prevent a person from developing a specific personality type than it is to determine his or her future personality, Kagan told The Dana Press in 2010.

"Knowledge of a child's temperaments does not predict their adult personality profiles very well," he said. Knowing that an infant is highly reactive to new stimuli doesn't necessarily tell you that he or she will be extremely shy or timid later in life, Kagan said. However, it's pretty rare for an extremely reactive infant to transform into the most outgoing, enthusiastic person at the party.

Short of digging up Trump's baby book or finding Clinton's childhood home movies, it's not going to be particularly easy to determine what parts of each candidate's personality is owed to innate temperament and which aspects are due to their upbringing and experience. And it's safe to say that voters would probably still disagree on the appropriate presidential personality anyway — after all, the country has seen leaders as diverse as melancholic Abraham Lincoln and buoyant Theodore Roosevelt, and historians consider both former presidents to have been strong leaders.

Assessing presidents' temperaments after they're no longer in office (and, in many cases, posthumously) is tricky business. One attempt, "Presidential Temperament: The Unfolding of Character of 40 Presidents of the United States" (Prometheus Nemesis Book Co., 1992), divided the presidents into artisans, guardians and rationalists (none qualified for the fourth category, idealist) based on a personality test similar to the Myers-Briggs Type Indicator (a test that is itself not seen as particularly reliable by psychologists).

Temperament category as defined by this assessment (which does not differentiate between personality and temperament) does not necessarily predict popularity or historical rankings. According to the analysis, Calvin Coolidge and Harry S. Truman were both "guardians" by nature, for example. Truman typically ranks in the top 25 percent of presidents in historian polls, while Coolidge is in the third quartile, at best.