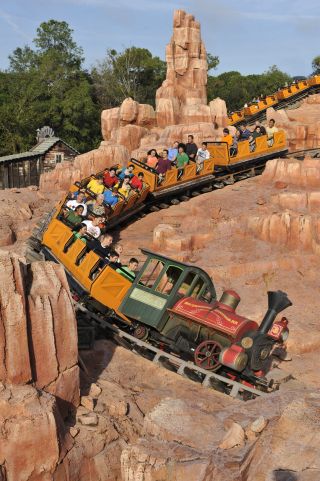 Doctors may have found an unconventional way to get rid of painful kidney stones — but it will cost you a trip to Disney World.

Researchers found that riding the Big Thunder Mountain Railroad roller coaster at Disney World could help ease the passage of small kidney stones, according to the new study.

Kidney stones are hard masses of minerals that form in the kidneys. They can range in size, from a tiny grain of sand to, in extreme cases, the size of a golf ball. Patients with kidney stones don't always need treatment, because the stones can pass out of the body on their own, but the process of passing them can be quite painful. The stones must travel from the kidney down the ureter and to the bladder, and then exit the body through the urethra.

The authors of the new study, published today (Sept. 26) in the Journal of the American Osteopathic Association, noticed that several of their patients had reported passing kidney stones after going on the Big Thunder Mountain Railroad roller coaster at Disney World in Florida.

In one instance, for example, a man told the doctors that he passed a stone after three consecutive rides on the roller coaster, according to the study. [16 Oddest Medical Cases]

Studying this phenomenon required a bit of ingenuity from the researchers. To test the effects of riding a roller coaster with kidney stones, they created a 3D model of a kidney that could be taken along for the ride (concealed in a backpack, of course).

In the experiment, the researchers placed three real kidney stones and some urine in the model kidney. The kidney stones were different sizes: small (4.5 cubic millimeters), medium (13.5 cubic mm) and large (64.6 cubic mm).

But seat assignment turned out to be important. When the researchers were seated in the rear car of the roller coaster, the kidney stones, regardless of their size or location in the kidney, passed nearly 64 percent of the time, according to the study.

The preliminary study's findings "support the anecdotal evidence that a ride on a moderate-intensity roller coaster could benefit some patients with small kidney stones," Dr. David Wartinger, a professor emeritus of urology at the Michigan State University College of Osteopathic Medicine and a co-author of the study, said in a statement.

Riding a roller coaster after having treatments such as lithotripsy — a procedure that aims to break up kidney stones into smaller particles using ultrasound shock waves — could prevent stones from getting larger and causing additional problems, Wartinger said.