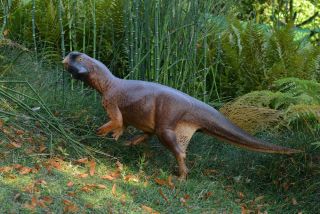 The dinosaur Psittacosaurus likely had light coloring on its underside and dark coloring on its topside.
(Image: © Jakob Vinther, University of Bristol and Bob Nicholls (Paleocreations.com))

Tiny fossil clues left behind on an early Cretaceous-era dinosaur have revealed the dinosaur's original coloring, a new study finds. The 120-million-year-old dinosaur, a Triceratops relative known as Psittacosaurus, had a dark-colored backside and a light underside, along with a splash of spots and stripes on its body, including its back legs, the researchers said.

This dark-on-top, light-on-bottom coloring scheme, known as countershading, is common among modern animals today, the researchers said. Creatures with countershading can use their coloring as camouflage when they're in a shadowy area, such as a forest.

Given the Psittacosaurus's coloring, it's likely that the beast lived in an area with "diffuse illumination" such as a forest, the researchers wrote in the study. [Photos: Oldest Known Horned Dinosaur in North America]

Psittacosaurus was one bizarre-looking beast: The horned creature looked like a cross between a porcupine and a lizard, with a parrot-like beak and a row of bristles sticking out from its tail. And that's not all — horns jutted out from its cheeks, and pointed claws adorned all four of its limbs, which were also decorated with spots and stripes.

The remains of this 5-foot-long (1.5 meters) oddball, now called Psittacosaurus, were discovered in the late 1990s in Liaoning, China — an area famous for its well-preserved fossils of feathered dinosaurs. But it wasn't until 2009 that molecular paleobiologist Jakob Vinther and his colleagues came across the fossils at the Senckenberg Museum in Germany.

When he saw the Psittacosaurus, Vinther noticed that "the color patterns were just so clear," and he decided that he needed to study them, because he realized that they could help paleontologists understand camouflage patterns and how they might reveal information about a dinosaur's habitat.

To investigate the museum specimen, Vinther and his colleagues looked for evidence of pigment on the remarkably preserved Psittacosaurus's skeleton, which had extremely well preserved skin compressed into a film outlining the body and superimposed on the skeleton. They found "little oblate bodies, which resemble melanosomes" — small cell structures that hold melanin pigments that are found in feathers and skin.

The newfound melanosomes were similar to those found in two other Psittacosaurus fossils, Vinther said. An analysis of their structure suggests that they would have given the dinosaur a brownish color, he added.

The researchers also used polarized light photography to capture the dinosaur's color pattern left on the specimen, including its spots and stripes. Also, a technique called laser stimulated fluorescence made the scales and bristles fluoresce brightly, which "made their characterization easier," Vinther said.

For instance, they found that the face was heavily pigmented, likely for display, he said. There was also a pigmented cloacal opening — the area in which animals defecate and females are inseminated, he said.

After studying the melanosomes of Psittacosaurus, the researchers worked with paleoartist Bob Nicholls to create a life-size 3D model, complete with color. [In Photos: Wacky Fossil Animals from Jurassic China]

Because of the model, "We were able to not only see how the patterns of shading changed over the body, but also that it matched the sort of camouflage which would work best in a forested environment," the study's senior author Innes Cuthill, a professor of behavioral ecology at the University of Bristol, said in a statement.

Moreover, studies that look at the ancient geography and life of the Jehol biota, where the specimen was found, suggest that the area had lakes that were surrounded by a coniferous forest and a few deciduous plants, the researchers wrote in the study, which was published online today (Sept. 15) in the journal Current Biology.