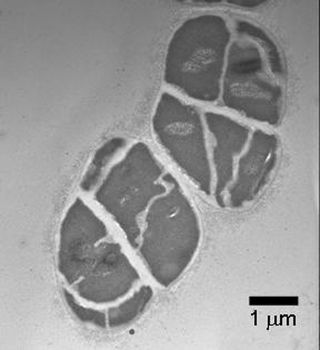 Biologists have found microbes that live in the hottest, coldest, driest and most unpleasant places on Earth. Many of these bugs don't adapt well to new surroundings, but one microbe is remarkable for withstanding a wide range of conditions. This quality might make this unique organism suitable for adapting to life on Mars.

This ultimate survivor is called Methanosarcina barkeri. It is found in freshwater and marine sediments, and other places where oxygen is scarce. Because it breathes out methane, researchers are interested to see if it — or some other "methanogen" — could be responsible for the methane that was detected in the martian atmosphere in 2003.

What makes M. barkeri stand out among its methanogen cousins is that it is not as picky about where it lives. Recent studies have found that it can manage long dry spells and wide temperature swings.

"It has all the characteristics to survive on Mars," says Kevin Sowers of the University of Maryland Biotechnology Institute.

Sowers thinks a M. barkeri-like bug might handle everything the red planet throws at it: strong seasonal water cycles, scarce nutrients, and day-night temperature differences as high as 100 degrees Celsius.

To support this hypothesis, Sowers and his colleagues plan to put M. barkeri through the wringer to see how just how adaptive it is. Under extremes of dryness, temperature and oxidation, they will investigate the organism's DNA and cell functions, as well as an outer "armor" that may be the microbe's key survival mechanism.

This research is funded by NASA's Exobiology and Evolutionary Biology Program.

M. barkeri belongs to the Archaea domain of life, the same as many of the extremophiles that survive in some of the harshest conditions on Earth. Not an extremophile, per se, M. barkeri is extreme in its compatibility.

"A specialist will beat out M. barkeri in the specialist's environment," Sowers says. "But when the conditions are fluctuating, the odds are that a survivalist like M. barkeri will have the best chance."

One of M. barkeri's advantages is that it eats a wide variety of things. It can digest several compounds, including methanol (wood alcohol) and acetate (related to vinegar). Or it can get its energy solely from a mixture of hydrogen and carbon dioxide, both of which are believed to be present on Mars.

M. barkeri can also build from scratch its own organic molecules (such as amino acids and vitamins) using phosphate, sulfur and other minerals that it finds in the soil, as well as nitrogen that it fixes from the atmosphere.

To add to its self-sufficiency, M. barkeri can move through water by creating little gas vesicles that work like the ballast in submarines, making the microbe buoyant.

When water becomes scarce, the microbe can go dormant and wait out the dry spell. It's not clear, however, how it performs this last trick.

Dried out but not spored up

Many bacteria, like Bacillus subtilis, can survive water deprivation by transforming into spores that have a unique shape and reduced cell activity.

"The spore state can exist for years," Sowers says. "The cells can sense when conditions are right to ramp up again."

But M. barkeri seems to employ an entirely different mechanism. Rather than changing shape like spore-formers, it builds a kind of outer shell. This tough, extracellular structure is made from chains of sugar-like molecules, much like connective tissue in higher organisms such as humans, Sowers says.

The outer covering may provide protection against the elements. "If you desiccate M. barkeri, it can survive oxygen exposure and high temperatures," says Sowers. In previous work, he and his colleagues found that "dormant" organisms could be revived after being exposed to the open air and temperatures above 40 degrees Celsius – environments that would kill the microbes in their normal state.

To better understand the resilience of M. barkeri, Sower's group will be depriving microbial samples of water for weeks, months, even years, while also exposing them to extremes of temperature and oxygen.

"We are pushing the envelope to see what the organism's limits are," Sowers says. They will use DNA microarrays and 3D tomography to see how the cells respond and what benefit the outer shell confers.

Timothy Kral from the University of Arkansas believes this research is "very significant." His group has also studied M. barkeri and other methanogens as models for life on Mars.

The ability of these organisms to survive dry conditions for a long time "is very relevant to Mars where water-availability may be seasonal, as it is in some locations on Earth," Kral says.