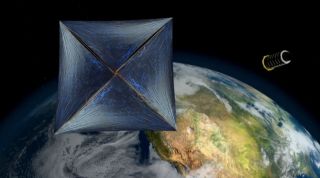 An illustration depicts the Breakthrough Starshot Nanocraft, revealed at a press conference on April 12, 2016.
(Image: © Breakthrough Prize Foundation (via Livestream))

The famed cosmologist, along with a group of scientists and billionaire investor Yuri Milner, unveiled an ambitious new $100 million project today (April 12) called Breakthrough Starshot, which aims to build the prototype for a tiny, light-propelled robotic spacecraft that could visit the nearby star Alpha Centauri after a journey of just 20 years.

"The limit that confronts us now is the great void between us and the stars, but now we can transcend it," Hawking said today during a news conference here at One World Observatory. [Stephen Hawking: 'Transcending Our Limits' With Breakthrough Starshot (Video)]

"With light beams, light sails and the lightest spacecraft ever built, we can launch a mission to Alpha Centauri within a generation," he added. "Today, we commit to this next great leap into the cosmos. Because we are human, and our nature is to fly."

The Starshot spacecraft will consist of a wafer-size chip attached to a super-thin sail that measures perhaps 3.3 feet (1 meter) across. This paired duo will be launched to space aboard a mothership, and then propelled to the stars by laser light beamed from a high-altitude facility here on Earth.

Such a craft, Milner said, could be accelerated up to 20 percent the speed of light — fast enough to make it to the Alpha Centauri system, which lies 4.37 light-years away, just two decades after launch. (It would take a conventionally propelled probe about 30,000 years to make such a trip.)

"We call it the Nanocraft," Milner said. "Our interstellar sailboat."

The Nanocraft "could capture images of possible planets and other scientific data and send them back home in a beam of light," Milner added. "If this mission succeeds, it will tell us as much about ourselves as it will about Alpha Centauri.

"Breakthrough Starshot is based on technology either available or likely to be available in the near future," Milner said, adding that all of its work is based on data in the public domain.

Developing and proving out Starshot technology will be time-consuming and expensive; sending Nanocraft to Alpha Centauri will probably end up costing about as much as the largest scientific experiments operating today, team members said.

But subsequent missions should be much cheaper, and economies of scale will allow many Nanocraft to launch on a single flight to provide redundancy and increase photographic coverage of the target star system. (The chip at the heart of each Nanocraft costs about as much as an iPhone to produce, Breakthrough Starshot representatives said.)

Today's announcement comes on the 55th anniversary of cosmonaut Yuri Gagarin's historic launch on Vostok 1 in 1961, a mission that ushered in the era of human spaceflight. Milner, who was born in Moscow, has said he was named in honor of Gagarin. Today is also the 35th anniversary of NASA's first space shuttle flight, STS-1, aboard Columbia.

"The human story is one of great leaps," Milner said in a statement. "Fifty-five years ago today, Yuri Gagarin became the first human in space. Today, we are preparing for the next great leap — to the stars."

Breakthrough Starshot's board consists of Hawking, Milner and Mark Zuckerberg, the founder and CEO of Facebook.

This is not the first time Hawking and Milner have worked together: Hawking helped unveil Milner's 10-year, $100 million initiative to search for signs of intelligent life called Breakthrough Listen last July. That project, which is billed as the most powerful search ever for extraterrestrial life, will survey 1 million stars in the Milky Way closest to Earth. The 10-year project will also scan the 100 closest galaxies to our own for any traces of intelligent life.

Milner, meanwhile, is also funding the Breakthrough Message project, which will award up to $1 million in prizes to people who craft the best messages to send out to any intelligent life that may be listening.