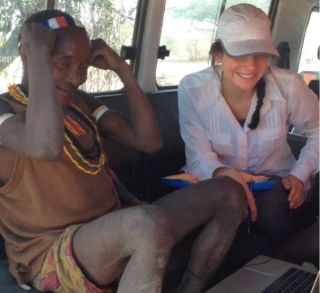 It's no joke — laughter can actually provide clues about whether people are among friends or strangers, a new study finds.

When people laugh among friends, their guffaws tend to sound more excited than when that laughter occurs between strangers, said study lead researcher Greg Bryant, an associate professor in the Department of Communication Studies at the University of California, Los Angeles (UCLA).

"It is often faster and has more irregularities in frequency and loudness that gives it an aroused sound," Bryant told Live Science in an email. [Audio of Laughter Between Friends Makes Hadza Bushman Laugh | Video]

Usually, people think of laughter as a way to express positive emotions and a team mentality, Bryant and his colleagues wrote in the study. But laughter can also provide clues for eavesdroppers. For instance, an eavesdropper could decipher whether people are friends simply by listening to them laughing, Bryant found.

However, it wasn't clear from previous research whether this laughter quirk was universal across cultures. So Bryant and study co-researcher Daniel Fessler, a biological anthropologist at UCLA, played 1-second audio clips of laughter, and asked people from 24 different cultures, including those in Austria and Slovakia to rural Peru and Namibia, to listen and assess the recordings.

"We expected that it would work everywhere given the evolutionarily ancient nature of laughter," Bryant said. After playing the bursts of laughter countless times, he found that laughter's nuances are, indeed, cross-cultural.

For the study, Bryant used 48 audio clips he had extracted from 24 conversations recorded about 10 years ago. Half of the conversations happened between established friends, and the other half took place between strangers. He had friend groups and stranger groups for every gender combination: all male, all female and mixed.

The researchers then played the recordings in a random order, and asked 966 listeners to judge whether the laughing people were friends or strangers. The participants also rated how much they thought the people liked each other.

In all, the listeners were right 61 percent of the time, the researchers said.

"We found that listeners in every society that we tested around the world could detect better than chance whether people were friends or strangers," Bryant said.

"But more interestingly, we found that female friends were identified at the highest rate in every society  — on average a little over 80 percent correct," Bryant said. This likely happened because the laughing women tended to show the most detectable signals that they were friends — that is, their laughter was more positive overall, Bryant said. What's more, people around the world tended to assume that if two females were laughing together, they must be friends, "regardless of whether they were or not," he said.

The participants also excelled at correctly identifying male-male strangers, and were more likely to predict that these duos liked each other the least compared with the other laughing pairs.

The findings show that laughter can communicate social information beyond the limits of language and culture, he said.

"A good deal of how people hear laughter is the same anywhere you go," Bryant said. "Moreover, it seems that laughter likely played a role in early human social organization and cooperation, and is directly tied evolutionarily to similar vocal sounds in nonhuman primates."

The study was published online today (April 11) in the journal the Proceedings of the National Academy of Sciences.