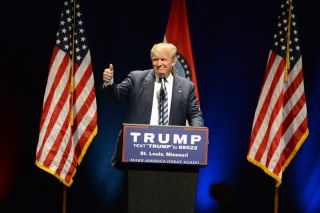 Just about every topic, from eminent domain to “hand” size, has scuttled onto the debate stage this election cycle. But the presidential candidates have uttered little about science policy

“It’s been conspicuous by its absence,” says Dr. Peter J. Hotez, Dean of the National School of Tropical Medicine at Baylor College of Medicine.

Nonetheless, the Republican frontrunner, Donald Trump, has made public remarks that give voters a glimpse into what some of his scientific policies might be. We asked some science and policy experts to discuss Trump’s stances, and what that could mean for Americans in the future.

Go slow on climate action: Trump has tweeted that climate change is a Chinese-driven hoax, though he later called the Tweet a joke. In aninterview with Fox and Friends, he called climate change “just a very, very expensive form of tax” and “very hard on business.”

Sizing up the science: “There’s been a misperception that either you get a good economy or you protect the environment,” says Peter LaPuma, an associate professor in the Milken Institute School of Public Health at George Washington University.

LaPuma, who worked as a sustainable energy consultant for Booz Allen Hamilton before joining George Washington, says many companies have found that sustainable practices actually boost their bottom lines. For example, IT companies like Apple have begun using renewable energy to power their data centers, a switch that often saves money because the cost of energy sources like solar has dropped so much.

Immediate action to combat climate change has immediate benefits, according to LaPuma. “Climate change is not just polar bears 100 years from now,” he says. Replacing a coal-fired power plant with a solar farm can benefit health immediately, as well as clearing the air for better views of the country’s natural landscape.

Cut the EPA: Trump has said he would cut funding for the Environmental Protection Agency and return environmental protection responsibilities to the states. He claims the agency hurts business, and in an interview with The Wall Street Journal, called the EPA “the laughingstock of the world.”

Sizing up the science: “There would be serious repercussions” by 2020 if the EPA were severely downsized or abolished, according to Rice University’s Baker Institute for Public Policy professor Neal F. Lane, who directed the National Science Foundation and later the White House Office of Science and Technology Policy under President Clinton.

Lane says the EPA plays a critical role in protecting clean air and drinking water, and that its regulations have helped rehabilitate polluted water bodies like Lake Erie, which was pronounced “dead” in the 1960s. “This is not just a bunch of regulators hugging trees,” he adds. Though states do have a part to play in regulation, the country needs a federal regulating body, according to Lane, because contaminated water and air can cross state borders.

That’s not to say citizens shouldn’t weigh in on the agency’s proposed rules. “There will always be a healthy debate between the private sector and the federal government on these regulations,” says Lane. For this reason, he said, the EPA solicits public comment before making new rules.

If Congress supported Trump in slashing funds for the EPA or changing the law to remove the agency’s power to regulate, Lane predicts there would be an outcry from overwhelmed governors and “reasonable people who care about their families, their children and their life style.”

Alter vaccination schedules to avoid autism: Trump says he favors vaccines, but giving children smaller doses over a longer period of time. He has blamed vaccines for causing autism in children.

Sizing up the science: “I remember wanting to throw something at the TV when I heard it,” Hotez says of Trump’s debate statement linking vaccinations and autism.

Hotez, who develops vaccinations and also has a daughter with autism, says studies have found no link between autism and vaccination. “The anti-vaxxers keep moving the goalposts,” he says. After scientific studies debunked accusations against specific vaccinations, Hotez says those against vaccinations started a different fad: arguing to change the vaccination schedule to protect children.

But infants’ immune systems face up to hundreds of new antigens every day, according to Hotez. Adding a few more in the form of a vaccination does not harm infants. He says changing the FDA’s approved vaccination schedule without clinical testing about immune response could decrease vaccines’ efficacy.

To imagine what a future with fewer or less effective vaccines might look like, Hotez suggests voters think of California’s recent outbreak of measles, a true threat to children’s health. “It’s one of the great killers of children in the world,” he says. “One hundred thousand children die every year of measles.”

Sizing up the science: “The good thing is that he doesn’t think [Planned Parenthood] is evil,” says Amy Tsui, a professor at Johns Hopkins Bloomberg School of Public Health. But, she says, no federal funding has gone to abortion since the Hyde Amendment of 1976 (though Medicaid can fund abortion in the case of rape, incest, or endangerment of the mother’s life).

If Trump defunds all Planned Parenthood clinics, even those that don’t perform abortions, then he’ll be “throwing the baby out with the bathwater,” according to Tsui. She says Planned Parenthood’s low-cost care and urban clinic locations, helps low-income women in particular.

In fact, Leighton Ku, Director of the Center for Health Policy Research at George Washington University, says that decreased access to Planned Parenthood’s contraception services could increase the rate of unwanted pregnancies and possibly cause a spike in abortions.

Sizing up the science: George Washington’s Ku says the number of Americans without health insurance is at its lowest in recent recorded history, and has reached that point without ballooning healthcare costs. He says he’s concerned that repealing the Affordable Care Act might leave 13 million people insured under the plan without coverage.

Allowing insurers to compete across state lines could potentially lower cost, but Ku points out that state insurance standards differ, and Trump has not clarified which state’s rules would apply in interstate deals. Ku also views tax deductibility as a red herring: Low-income Americans, who struggle the most to get insured, already pay little to no taxes on care.

Lowering barriers to imported medicine could decrease prices, but Ku warns that pharmaceutical manufacturers will likely try to raise prices outside the U.S. if imports grow more common. This might cut into some of Americans’ savings. Restrictions on some countries, like China, should continue, he says, because of issues with counterfeited pharmaceuticals. Even so, the FDA would need more resources to monitor imports. Regardless, Ku doubts a Republican Congress would go along with Trump’s proposal.

In summary, Trump’s proposals have not won over the scientists we consulted. Hotez expressed hope that Trump will bring experts onboard to make more informed proposals if he becomes the Republican nominee. But Lane says he’s skeptical even of that.

“Who would he recruit to his science team?” asks Lane. “How capable would they be of providing advice? Of course, I don’t have the answer to that. But it’s a question voters should have in their minds.”