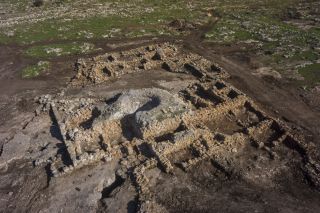 After spending thousands of years buried in ancient hills, remnants of buildings dating back to the Byzantine era and earlier emerged from hiding, excavated outside Rosh Ha'ayin in central Israel, about 10 miles (17 kilometers) inland from Tel Aviv.

A recent announcement by the Israel Antiquities Authority (IAA) described a many-chambered farmhouse, estimated to be 2,700 years old, measuring about 100 by 180 feet (30 by 50 meters) and containing a cluster of 24 rooms connected to a central courtyard. The walls were preserved to a height of about 6.6 feet (2 m).

The courtyard once held a storage compartment for protecting grain, Amit Shadman, IAA excavation director, said in the statement. Other artifacts found nearby include a number of millstones used for grinding flour, suggesting that growing and processing grain were "fairly widespread" in the region, Shadman said. "It seems that carbohydrates were as popular then as now," he added. [See Photos of the Farmstead and Church Mosaics in Rosh Ha'ayin]

Excavators also revealed oil presses carved from rock and a pair of silver coins stamped with images of the goddess Athena and an owl — her sacred bird — dating to the fourth century BCE.

Another multiroom structure protruding from a nearby hill was a monastery approximately 1,500 years old. The building once held stables, living quarters, an oil press and a church with colorful mosaic floors. Tiles were laid in intricate geometric patterns, with one pattern spelling out a Greek inscription welcoming visitors in the name of "Theodosius the priest."

The new finds take their place among many others that have emerged in recent years, representing Israel's ancient past. Another farmhouse dating to the eighth century BCE was discovered near Rosh Ha'ayin in early December 2014. Its 23 rooms also radiated outward from a central courtyard that once held a grain silo, and multiple winepresses were found close by. Eventually abandoned as a monastery, the structure was partially destroyed hundreds of years later, when inhabitants during the Ottoman period built a limekiln on the site.

Shadman explained in the statement that the farmstead and monastery represent two waves of inhabitants that settled in the region over time. The older farmstead, and others like it, flourished for hundreds of years, but were largely abandoned when people fled the area during the Hellenistic period.

After many more centuries passed, a wave of Christian settlers arrived during the fifth century CE. At the time, Christianity was spreading rapidly across Israel, evident in the number of surviving ancient monasteries and churches that archaeologists continue to uncover.