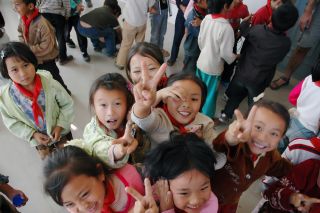 A group of excited schoolkids in Dali, China, mug for the camera in 2005.
(Image: © Regien Paassen / Shutterstock.com)

China is officially ending its one-child policy, and will alow all married couples to have two children.

The move, an attempt to counteract the graying demographics of the country, was laid out today (Oct. 29) in an official communiqué, or summary, of a meeting of the Communist Party Leaders, released by the Xinhua News Agency. The party officials came to their decision after a four-day meeting to flesh out the five-year-development plans for the country. [10 Scientific Tips for Raising Happy Kids]

"Improve the demographic development strategy," the communiqué read. "Comprehensively implement a policy that couples can have two children, actively taking steps to counter the aging of the population."

The move comes as a response not only to a rapidly aging population, but also to an economy facing a labor shortage and slow growth.

China's one-child policy was first implemented in 1980, and was often enforced through coercive practices, such as forced sterilization and abortion, according to news reports. In addition, the cultural preference for boys has led to the selective abortion of female fetuses. The policy is one reason that China has one of the most imbalanced sex ratios in the world, with 112 boys born for every 100 girls, according to the World Bank.

Not only did it sway sex ratios, the policy may have had psychological implications. A small study of 421 people born in Beijing revealed that compared with kids born before the policy went into effect, those born after were more averse to risk, less trusting and more pessimistic. That finding, detailed in the Jan. 10, 2013, issue of the journal Science, seemed to support stereotypes of China's "little emperors" growing up coddled and unsocialized.

In recent years, China had relaxed its one-child policy. In 2013, the country said that people who were only-children could themselves have two children. And in 2007, China allowed families to have two children if their first child was a girl. Some populations, such as Tibetans, have no limit on the number of children they can have. Even before this announcement, the majority of Chinese people of childbearing age were already allowed more than one child.

Despite the move, it's not clear that China will experience a major baby boom. The last announcement failed to produce a huge uptick in the birthrate. The cutthroat competition and high costs to raise children dissuade many people from having children in China, Mu Guangzong, a professor of demography at Peking University, told the New York Times.

"I don't think a lot of parents would act on it because the economic pressure of raising children is very high in China," Guangzong said. "The birthrate in China is low and its population is aging quickly, so from the policy point of view, it's a good thing as it will help combat a shortage of labor force in the future. But many parents simply don't have the economic conditions to raise more children."

A 2008 Pew Research Center survey found that roughly three in four Chinese supported the one-child policy. Even if people do start having more children, it will take decades for the new babies to grow up, join the labor force and help care for the elderly.