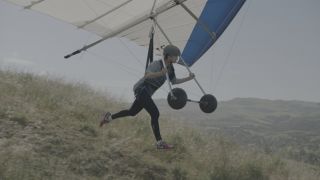 From an athlete with a mind-controlled prosthetic limb to a person with modified DNA or a bionic eye, cyborgs will surely be just as diverse as flesh-and-blood humans. Perhaps the tech-advanced individuals will be "more than human," says actor Paul Giamatti.

In the second episode of "Breakthrough," a six-part series groundbreaking research that will air on the National Geographic Channel, Giamatti takes viewers on a trip around the world as he interviews innovative thinkers about the future of human cyborgs.

The series, a partnership between the National Geographic Channel and GE, features celebrity directors such as Giamatti, Ron Howard and Angela Bassett, who tackle scientific questions and ask researchers about their breakthroughs and the ethical quandaries surrounding them. [The 6 Strangest Robots Ever Created]

"Scientists, technologists, they could be heroes, but they tend to be more or less invisible," American film director, producer and actor Howard said in the "Breakthrough" teaser. "Our episodes attempt to give them a microphone and understand what's making them tick as an individual, what's motivating them, what's driving them — sometimes it's very surprising."

The series will examine six big issues — pandemics, cyborg technology, the human brain, aging, alternative energy and water shortages — and reveal the stories, people and technology behind each.

In the first episode, Giamatti uncovers the diversity of cyborgs. Coined in a 1960 research paper, the term "cyborg" today describes people who use or are dependent on outside mechanical or electronic devices, such as a pacemaker or an artificial limb.

But cyborgs could also be a person using a carbon-fiber exoskeleton to lift heavy objects, or a deaf individual who wears electronic clothing to help them "feel" sound, Giamatti explains on the show.

Cyborgs could even be people with genetically modified DNA who benefit from techniques such as CRISPR — a "microscopic programmable nano robot" that can snip out DNA "letters" and replace them with new genetic material, said George Church, a geneticist at Harvard Medical School, on the show.

Through his interviews, Giamatti explores the boundary between human and machine. For instance, would someone with numerous devices incorporated into their bodies, and their very cellular structures, still be human? As he mulls these questions, Giamatti gives viewers an inside look at cutting-edge research and the people behind it.

"They're not only brilliant scientists, they're imaginative, creative and deep-thinking people," Giamatti says in the show. "They seem to think a lot about what makes us human, and what will someday make us more than human."

The first episode of "Breakthrough," "Fighting Pandemics," directed by Peter Berg, will air on the National Geographic Channel on Sunday, Nov. 1, at 9 p.m. ET/PT. Catch the following episodes at the same time on Sundays.