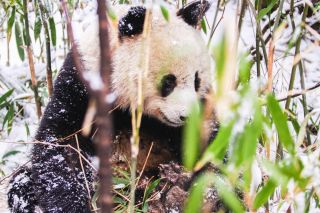 The maps reveal that pandas are a boon for China's wildlife, and that further protection for pandas will end up benefitting other species as well. Currently, 14 mammal species, 20 bird species and 82 amphibian species are insufficiently protected.
(Image: © Binbin Li & Stuart Pimm)

China is home to some amazing animal species, from golden snub-nose monkeys to the charismatic giant panda. New research suggests that protections given to the bamboo-eating pandas have benefited other threatened species in the region. Here's a look at China's gorgeous wildlife. [Read the full story on how panda protections help other species]

A golden snub-nose monkey (Rhinopithecus roxellana), found only in the forest of central and southwestern China. New research published September 16 in the journal Conservation Biology finds that these endangered monkeys can benefit from protections meant for pandas. Panda preserves provide an "umbrella" of protection for golden snub-nose monkeys and other species that share the panda's range. This monkey is seen in the Qinling Mountains of Shaanxi Province. (Credit: Binbin Li.)

Golden snub-nose monkeys live in bands of dozens to hundreds in forests between 4,900 feet and more than 11,000 feet (1,500 meters to 3,400 meters) elevation, and they're adapted for the cold, snowy weather found at these heights. They are listed as endangered by the International Union for Conservation of Nature (IUCN). According to the IUCN, there are a total of about 20,000 golden snub-nose monkeys (divided among three subspecies) in the wild. (Credit: Binbin Li.)

Panda and golden snub-nose monkey habitat overlaps, meaning that panda preserves provide zones of safety for these monkeys. Habitat destruction is the main threat to these monkeys, according to the University of Wisconsin's Primate Info Net, though poaching for fur and meat remains a concern, too. This monkey was photographed in the Qinling Mountains of Shaanxi Province. (Credit: Binbin Li.)

Not endangered, but protected

A blue eared pheasant (Crossoptilon auritum) at the Wanglang National Nature Reserve in Sichuan Province. This nature reserve, established in 1965, protects giant pandas as well as these birds, which live in mountainous areas of central China. The blue eared pheasant is listed as "least concern" by the IUCN. (Credit: Binbin Li.)

Fun and engaging, and protecting others

A panda plays peek-a-boo around a tree trunk at the Bifengxia Giant Panda Breeding and Conservation Center in Sichuan Province. China's flagship species provides an umbrella of protections for less charismatic animals. New research reveals that 96 percent of the panda's range is in "endemic centers" — areas that are in the top 5 percent for number of species found only in China. (Credit: Binbin Li.)

A giant panda at the Bifengxia Giant Panda Breeding and Conservation Center in Sichuan Province. China has devoted large amounts of resources into protecting pandas, including a successful lending program that has seen these hard-to-breed bears reproduce in zoos around the world. (Credit: Binbin Li.)

Pandas are iconic, but the takin (Budorcas taxicolor tibetana) is hardly known outside its range. This takin – a subspecies known as the Sichuan or Tibetan takin — stands in snow at the Wanglang National Nature Reserve. Takins are also known as gnu goats. This subspecies is listed as vulnerable by the IUCN. (Credit: Binbin Li.)

A Sichuan takin scratches an itch at the Wanglang National Nature Reserve. Takin live alongside pandas, tackling steep slopes with ease and hiding in dense underbrush. They roam at elevations as lofty as 14,000 feet (4,267 m), according to the Lincoln Park Zoo. (Credit: Binbin Li.)

Here's lookin' at you

The takin's large snout helps it warm the cold mountain air as it breathes, keeping the animal toasty even in the depths of winter. Takins also have thick, double-layered coats, according to the San Diego Zoo. Because takins live in such cold, remote climes, little is known about their numbers or behavior in the wild. (Credit: Binbin Li.)

Kept safe in the preserve

Maroon-backed Accentor (Ptunella immaculata) has a large range throughout Bhutan, China, India, Myanmar and Nepal, according to the IUCN, which lists the bird as "least concern." This bird perches in the Wanglang National Nature Reserve in Sichuan, China. (Credit: Binbin Li.)

In their natural environment

Blue sheep (Pseudois nayaur) at the Wanglang National Nature Reserve. These animals are also known as bharal, or naur. Nimble slope-dwellers, blue sheep are the main food source of the elusive snow leopard, according to the World Association of Zoos and Aquariums. (Credit: Binbin Li.)

In need of a protector

A Tibetan Macaque (Macaca thibetana) photographed at Tangjiahe National Nature Reserve in Sichuan. This species, listed as near-threatened by the IUCN, is threatened by deforestation in east-Central China. Although this macaque is perching on a branch, these animals spend most of their time on the ground and sleep mostly in caves. (Credit: Binbin Li.)

Blue sheep (Pseudois nayaur) at Sanjiangyuan National Nature Reserve in Qinghai Province, China. This nature reserve covers part of the Tibetan Plateau, where blue sheep roam in small herds. These ungulates can climb as high as 21,000 feet (6,500 m) on rocky slopes, according to the Snow Leopard Trust. (Credit: Binbin Li.)

A close-up of a Tibetan Macaque (Macaca thibetana) at the Tangjiahe National Nature Reserve in Sichuan, China. These monkeys range from eastern Tibet into southeastern China and are listed as near threatened by the IUCN. Forest loss and habitat destruction are this monkey's greatest threat. (Credit: Binbin Li.)

A map of endemic bird distribution in China. Darker areas represent spots where there are more species of birds unique to the country. Half of the endemic animals of China are forest species, which means their ranges often overlap with the range of giant pandas. (Credit: Binbin Li & Stuart Pimm.)

A map of endemic mammal diversity in China. The darker the region, the more endemic species live there. Endemic species are defined as those whose range is more than 80 percent within China's borders. (Credit: Binbin Li & Stuart Pimm.)

A map showing the distribution of giant pandas in China. Pandas are mostly found in China's Sichuan province, subsisting on a diet of bamboo. (Credit: Binbin Li & Stuart Pimm.)

A map of endemic centers in the Sichuan region with panda protection areas overlaid in blue. This map shows places where panda reserves are protecting other native species. It also shows species-rich areas that are not protected. (Credit: Binbin Li & Stuart Pimm.)

Where the protection is

The maps reveal that pandas are a boon for China's wildlife, and that further protection for pandas will end up benefitting other species as well. Currently, 14 mammal species, 20 bird species and 82 amphibian species are insufficiently protected. (Credit: Binbin Li & Stuart Pimm.)