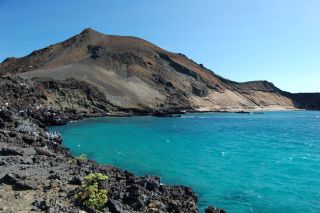 Raghu Murtugudde is a professor at the University of Maryland's Earth System Science Interdisciplinary Center (ESSIC) and the Department of Atmospheric and Oceanic Science. He is currently a visiting professor at the Indian Institute of Science Education and Research in Pune, India. Murtugudde contributed this article to Live Science's  Expert Voices: Op-Ed & Insights.

In fact, the Galápagos may well be responsible for the average four-year periodicity of El Niño that has persisted during the last 3 million to 5 million years, reducing overall rainfall in East Africa during the most critical phase of human evolution.

In the face of a sixth mass extinction, changes in El Niño patterns  and a purported pause in global warming — all subject to heated debate — the Galápagos Islands are creating an important refuge for some of their residents.

A recent study published in the journal Geophysical Research Letters found that wind-pattern changes in the tropical Pacific, together with the Galápagos Islands' location, has resulted in a shift in ocean currents. This shift has resulted in a 33-year-long expansion of a pool of cold water near the islands of Isabela and Fernandina, home to the endangered Galápagos penguin, which is the northernmost penguin species on the planet. The Galápagos penguin, like many of its island neighbors, depends on the bounty provided by nutrient-rich cold water, so the expansion of this cold pool is a welcome development for the species.

The prevailing trade winds from the southeast drive a westward surface current and bring up cold waters, ranging from 73 to 77 degrees Fahrenheit (23 to 25 degrees Celsius), in the eastern equatorial Pacific from the Galápagos toward the international date line. The westward surface current piles up water from west of the date line all the way to New Guinea, resulting in a downhill flow of current below the surface back toward the Galápagos. This subsurface return flow, referred to as the Equatorial Undercurrent (EUC), is blocked by the Galápagos and deflected south of the equator, away from the strongest wind-forced upwelling centered on the equator. This forces more cold water to flow upward and form a small pool against the west coasts of Isabela and Fernandina.

This island-driven upwelling resides within a larger-scale cold "tongue" extending west from the Galápagos, and brings up waters colder than 73 F. This smaller, colder pool — albeit away from the strongest equatorial upwelling — still resides within the large cold pool and provides a perfect habitat for Galápagos penguins. [Endangered Penguins Charm, from Tiny to King Size (Photos )]

When animals find a loophole

How far south the EUC gets pushed depends on how strongly the southeasterly trade winds are pushing against the equator. In the last three decades since 1982, the southeasterly trade winds have weakened, probably due to a combination of global warming and natural variability. This relaxing of the trade winds has reduced the southward deflection of the EUC, causing the island-induced upwelling to move closer to the heart of the strongest wind-driven upwelling on the equator. Thus, the coldest pool has expanded toward the equator, offering a biological loophole for the Galápagos penguins to expand their colonies.

The penguins' population has increased from its lowest — about 200 in the year 2000, when they were declared critically endangered — to more than 2,000 today. Rat eradication has reduced predation of chicks and adults, and habitat restoration efforts have also helped. But those efforts, as well as the creation of Marine Protected Areas (MPAs), have been focused on the southern-most habitats. It is clear from this study that the MPAs have to consider the dynamic nature of the biological loopholes being exploited by not only penguins, but also other endangered species in the Galápagos and elsewhere.

Environmental loopholes occur quite often in nature. For example, even during the strongest of El Niños, decimation of predators can result in an explosion of the prey population. Loopholes also occur because of changes in habitat conditions such as temperature. Warming of ocean temperatures can favor sardines while driving down the anchovy population leading to cycles in populations of anchovies and sardines in which one species increases in number during certain decades as the other decreases in population, and vice versa.

These physical-biological interactions tell us that nature makes the rules, but biology finds the loopholes. By a sheer accident of geography, the Galápagos appear to be full of biological loopholes right in the heart of El Niño's theater of action.

Among the oft-reported biological destruction by El Niño, Mother Nature offers tiny loopholes for life to survive in unexpected ways. As we clamor to count the destruction underway in the early stages of Earth's sixth mass extinction, we would be wise to keep our eyes open for new biological loopholes that will continue to emerge.