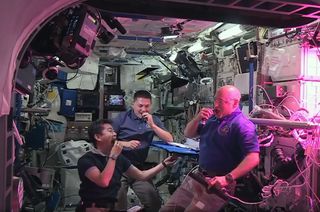 For the first time, at least officially, the NASA astronauts on board the International Space Station have tasted the product, or more specifically, the produce, of their work.

The three first tasted the lettuce plain, before also trying it with extra virgin olive oil and balsamic vinegar. [The Evolution of Space Food in Pictures]

The three saved a few leaves for their Russian cosmonaut crewmates, two of whom were out on a spacewalk.

Their space garden snack marked the first time NASA had cleared its astronauts to eat what they grew, following in the farming footsteps of earlier Russian cosmonauts, who first ate the leafy greens they cultivated aboard the space stationmore than a decade ago (whether U.S. astronauts unofficially partook in the previous harvests is not clear).

Before chomping down on the leaves, Kelly, Lindgren and Yui first cleaned the red romaine lettuce with citric acid-based sanitizing wipes. Mission Control gave them the go to eat half of the space bounty, setting aside the other half to be packaged and frozen on the station until it can be returned to Earth for scientific analysis.

Seed to salad in 33 days

The experiment, called Veg-01, is being used by NASA to study the on-orbit function and performance of the Veggie plant growth facility and its rooting "pillows," which contain the seeds.

The first pillows were activated, watered and cared for by Expedition 39 flight engineer and NASA astronaut Steve Swanson in May 2014. After 33 days of growth, the plants were harvested and returned to Earth last October. Back on the ground, the lettuce leaves went through food safety analysis at the Kennedy Space Center in Florida. [Space Food Photos: What Astronauts Eat]

The second Veg plant pillows were activated by Kelly on July 8 and again grew for 33 days before being harvested on Monday. The seeds had been aboard the space station for 15 months before being activated.

NASA is developing Veggie as part of its efforts to provide future astronauts with a sustainable food supplement. As the space agency strives toward missions farther into the solar system, Veggie will be a resource for the crew's food consumption. It could also be used by the astronauts for recreational gardening during the long-duration missions to an asteroid, the moon or Mars.

"Having lived on the space station for awhile, I understand the logistical complexity of having people live and work here for long periods and the supply chain that is required to keep us going," said Kelly. "If we're ever going to go to Mars someday, we're going to have to have a spacecraft that is more self-sustainable in regards to its food supply, as well as other things."

"This payload and having the ability to grow our own food is a big step in that direction," he said.

The Veggie system was developed by ORBITEC (or Orbital Technologies Corp.) in Madison, Wisconsin. Veggie, along with two sets of pillows containing the romaine seeds and one set of zinnias, was delivered to the station on board a SpaceX Dragon cargo capsulein April 2014.

The collapsible and expandable Veggie unit features a flat panel light bank that includes red, blue and green LEDs for plant growth and observation. Using LED lights in order to grow plants was an idea that originated with NASA as far back as the late 1990s, according to the agency's lead for advanced life support activities, Ray Wheeler, working in the Exploration Research and Technology Program Office at Kennedy.

"Blue and red wavelengths are the minimum needed to get good plant growth," explained Wheeler in a NASA release. "They are probably the most efficient in terms of electrical power conversion. The green LED [lights] help to enhance the human visual perception of the plants, but they don't put out as much light as the reds and blues."

Even without the lights though, Outredgeous red romaine lettuce is the reddest of the known lettuces. NASA chose Outredgeous after considering spinach, beet, Swiss chard, Chinese cabbage and Japanese Mizuna plants for its ease of growth, nutritional content and overall taste.

Future, and past, of farming in space

In the future, Veggie could be used to harvest other fruits, vegetables and plants — possibly even dwarf plum trees, according to NASA. And the benefits to the crew may go beyond just adding to the crew's food supply.

There may be a psychological benefit. The space station's crew does get some fresh fruits and vegetables, such as onions and apples, when the resupply ships arrive, but the quantity is limited and must be consumed quickly.

"We think that having that additional component of fresh food grown on the station, would make the crew generally happier, and hopefully healthier," said Gioia Massa, NASA project scientist for Veggie. "It's something to look at. It is something that changes with the passage of time."

That was the experience of the Russian cosmonauts who first experimented with growing edible plants.

Find out how the Russians tested farming in space, and learn about the past, and future of space food cultivation at collectSPACE.com