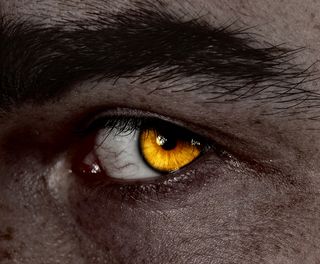 Scott Hawkins is an author and computer programmer, and recently published his first novel, "The Library at Mount Char" (Crown, 2015). He lives in Atlanta with his wife and a large pack of foster dogs. Hawkins contributed this article to Live Science's Expert Voices: Op-Ed & Insights.

There are, of course, people without conscience in the world. The American Psychiatric Association, in its DSM-IV-TR, estimated that 3 percent of males and 1 percent of females in the general population are psychopaths. Tellingly, those individuals make up an estimated 25 percent of the prison population. That type of personality is fascinating in its own way, but past a certain point, all you can really say about such minds is that they are indeed alien to most people.

Framing the same issue a slightly different way, I think everybody with a conscience has done something they wish they could take back. Still, you wouldn't have done it in the first place if it didn't seem like a good idea at the time. What was the thought process that led you to do something that you would later regret?

It's important to keep in mind that everyone is the hero of his or her own story.

Richard Nixon isn't widely regarded as the most beneficent soul to inhabit the Oval Office. But in his unguarded moments, such as the infamous "You won't have Nixon to kick around anymore" gubernatorial concession speech of 1962, he seemed to think of himself as a victim — not just more victim than villain, but almost exclusively. He was "the first president in this century who came into the presidency with the opposition of all of these major communication powers," wrote biographer Stephen Ambrose in "Nixon Volume II: The Triumph of a Politician, 1962-1972" (Simon & Schuster, 2015).

In his diary, Nixon wrote that he was impeached not as a result of the Watergate break-in, but because "the Democrats have made a command decision to get me out and Ford in and then tear him up and win in 1976,” wrote Ambrose. The biographer's exhaustive histories show Nixon railing against the press, minor government officials and indeed anyone who displayed anything other than the most obsequious personal loyalty. No slight was too ridiculous, no target too small. After a rough landing on a campaign trip, Nixon once decreed to H.R. Haldeman that there would be "no more landing at airports."

If Nixon had an alternative in mind, history does not record it. Had Nixon's aides followed through each time Nixon scrawled something like "Destroy Him!!!" across the top of a press clipping, there would have been no White House press corps left.

Speaking as a novelist, I think it's reasonable to conclude that this persistent sense of victimhood and its attendant rage helped Nixon smooth any qualms stirred by his Quaker upbringing when he contemplated his more questionable deeds.

It seems to be a fairly common pattern.

Former Italian Prime Minister Silvio Berlusconi felt similarly slighted. Despite efforts to have the statute of limitations for tax fraud shortened, he was ultimately convicted of that crime. Shortly before his trial, the eminently quotable Berlusconi offered this gem: "I am without doubt the person who's been the most persecuted in the entire history of the world and the history of man."

His position on these matters is epitomized by his following quote: "I am the Jesus Christ of politics. I am a patient victim. I put up with everyone. I sacrifice myself for everyone."

How far will you convince yourself to go?

Human nature also contributes to the emergence of amorality: If you're not exposed to contradictory opinions, you can convince yourself of just about anything.

Nixon's vindictiveness had another side effect, probably unanticipated. As president of the United States, he surrounded himself with those who were, if not out-and-out sycophants, at least people who thought twice before disagreeing with the man in power. Years of having his opinions go unchallenged on an interpersonal level seem to have affected Nixon's thinking.

It's hard to know just how deeply Nixon may have believed his post-presidency statement, "Well, when the president does it, that means it's not illegal," but it's safe to say that this is not something he learned at Duke Law.

Another example is Mao Tse-tung. By 1958, he was the unquestioned leader of China. His previous purges left him in a position in which his policies, however ill advised, went unquestioned. Mao especially distrusted intellectuals. When he ordered that steel production be augmented with backyard furnaces built by untrained peasants, metallurgists held their silence. As a result of this and other policy miscalculations, the Great Leap Forward ended up being the worst humanitarian disaster in Chinese history. Mao may not have been unduly bothered by that, but the disaster also significantly weakened his personal power.

Crossing the threshold into evil

It is easy to overlook the profound emotional distance that can come from a relatively small physical distance. It is much easier to commit terrible acts if you don't have to watch them play out in front of you.

As leader of the SS, Heinrich Himmler was one of the chief bureaucratic architects of the Holocaust. He knowingly organized and facilitated the murder of millions. Yet Himmler himself was famously rather squeamish. Once, on a rare visit to the Russian front, he personally witnessed a massacre of hundreds of prisoners, a relatively minor atrocity by SS standards. Even so, Himmler nearly fainted. That's fairly strong evidence that he was capable of empathy. One wonders if he would have been quite so efficient at his job had he worked at a desk overlooking the gas chambers.

Perhaps he would; the idea that orders from above often outweigh personal qualms is well-explored. But such circumstances amount to a failure of will, and that's a much different book than what I hoped to write.

"The Library at Mount Char"

My intention when writing my novel was, in part, to examine how strong-willed people are prone to miscalculations and incremental failures of empathy.

My antagonist did horrific things, motivated by rage that stemmed from atrocities he endured as a child. From an early age, he understood in his bones that bad things do happen. Despite his great power, on some level he lived always in shadow, terrified that those things might happen again. His cruelty stemmed from that fear, perhaps understandably. But at the same time, he was surprised when his peers recoiled from him. "You guys always treat me like I'm some kind of ogre!"

In his book, Stephen Ambrose wondered aloud if he was alone in thinking, "it must have been a terrible thing to be Richard Nixon."

Late in my novel, I showed a character who was "too busy" to pay attention to a brewing humanitarian disaster. But just a few pages earlier, the same character — sparked by pity for relatively minor suffering — gave a cab driver a small fortune in cash and a warning that likely saved the lives of the man's family. My character wasn't un-empathic, just too imaginatively flat to make the leap from dry words on a page to consequences for actual human beings, too preoccupied with her own problems to notice the effect her actions had on others, too driven to care very much.

The characters may be fictional, but their misdeeds stem from very real flaws: stunted empathy, emotional distance, and an inability or unwillingness to hear opinions they don't like. Everyone with a conscience has been guilty of similar moral miscalculation, though hopefully not at such tragic scale.

Most people try to be better than that.

Most of the time.