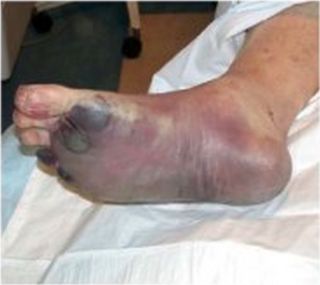 In septicemic plague, skin and other tissues may turn black and die, especially on the fingers, toes and the nose, according to the CDC.
(Image: © CDC)

A Colorado high school student died of the plague in early June, the first person since 1999 to get the plague in Larimer County, in northern Colorado, health authorities said.

The 16-year-old, Taylor Gaes, was an avid baseball and football player, according to the Coloradoan. The teenager's parents initially attributed his fever and muscle aches and pains to a bad case of the flu. They learned only after his death that he had septicemic plague, a rare form of the disease that happens when plague bacteria (Yersinia pestis) spread throughout the body, often in the blood stream, the Coloradoan reported.

It's tragic but not surprising that Gaes' symptoms were misinterpreted, said Dr. Amesh Adalja, an infectious disease physician and senior associate at University of Pittsburgh Medical Center for Health Security, who was not involved in Gaes' treatment. [Pictures of a Killer: A Plague Gallery]

"It's very hard to distinguish plague from a lot of other illnesses in its early stages," Adalja told Live Science. There are several forms of plague, and the type that Gaes had — with infection spread throughout the body — can be particularly difficult to recognize, he said.

"If someone has a bubonic plague, they will often have a swollen lymph node, which is very dramatic," he said. "But if someone has primary septicemic plague or pneumonic plague, you won't be able to distinguish it that easily from other common causes of respiratory illness."

Doctors and veterinarians should be vigilant about testing for the disease — also known as the Black Death that killed millions of Europeans in the Middle Ages — if they work in places where plague is known to occur, including the semirural regions of New Mexico, Arizona, Colorado and California, he said. Doctors usually test for the bacteria by culturing bodily fluids, such as blood, he said.

Gaes may have contracted plague from fleas on a dead rodent or other animal on his family's property, but an investigation to find the original source is ongoing, according to a statement from the Larimer County Department of Health and Environment. The department is working with experts from the U.S. Centers for Disease Control and Prevention (CDC), the state health department and the Larimer County Coroner's office to investigate the case.

Two days after getting sick, Gaes' symptoms were so bad that his family left a baseball game early, the Coloradoan reported. But he later reported feeling better, and stayed up late with his dad watching comedy shows.

In the early morning hours of June 8, Gaes started coughing blood. His parents rushed him to the hospital, but he died before they got there, the Coloradoan reported.

Septicemic plague is serious because it can harm the body's major organs if it goes untreated.

"The bloody cough was probably almost a terminal event, because it's now spread into his lungs and his breathing was compromised," Adalja said.

Though plague has few telltale symptoms, doctors can help save lives if they look for these signs: swollen lymph nodes, fever or chills, severe headache, extreme exhaustion and a general feeling of illness, according to the county's statement. Septicemic plague may also cause the skin and other tissues to turn black and die, especially on the fingers, toes and the nose, according to the CDC.

People who have had contact with infected cats, dogs, fleas or rodents (such as mice, squirrels and prairie dogs), should consult a doctor who can prescribe antibiotics to treat the disease.

Infected cats often appear ill and show swelling and sores around the mouth, head and neck, the county said. Domestic cats and dogs can carry infected fleas into people's homes, so it's important to provide pets with flea protection, county experts added.

Colorado is no stranger to the plague. During the summer of 2014, a man there who owned a dog got pneumonic plague after his dog contracted the disease. Three other people became ill with plague as well. All four people recovered, but doctors initially misdiagnosed the condition in three of the people, and the fourth chose to self-medicate with antibiotics without knowing why she was sick, according to a CDC report.

There are an average of seven human plague cases reported every year in the United States, and fatalities are rare, according to the CDC.

"It's important to remember that we do have cases in the United States every year," Adalja said.