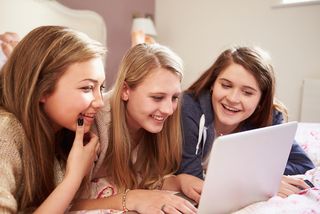 The vast majority of teenagers — 84 percent — now surf the Internet when they want answers to questions about their health, according to a new nationwide study.

Among all types of media, the Internet is the primary source of health information for adolescents, surpassing books, television, radio, newspapers and magazines, the study found.

In the study, researchers surveyed 1,156 American teenagers from ages 13 to 18, during late 2014 and early 2015. The survey included both English- and Spanish-speaking teens.

More than half of the teens surveyed (53 percent) reported that they are more likely to use the Internet to maintain good health than to check symptoms or diagnoses (33 percent). Teens also said they go online to find information for friends or family members (27 percent). Only 13 percent said they went online to research topics that they were uncomfortable discussing with their parents.

About a third (32 percent) said they had changed their behavior, such as eating healthier or exercising more, as a result of health information they found online. [10 Facts Every Parent Should Know About Their Teen's Brain]

The results of the study are being presented today (June 2) at a Northwestern Universitypolicy conference in Washington, D.C.

This is believed to be the first national study in nearly 15 years that examines how teenagers use the Internet to seek out health information, said the study's lead author Ellen Wartella, a communications professor at Northwestern University. It is also the only national study to document teens' use of newer technologies designed for health information, such as mobile apps, social networking sites, electronic games and wearable devices.

Although the results focus on a generation of adolescents who grew up with the Internet and are comfortable with technology, Wartella told Live Science that it's important for educators and other adults to help teens hone their digital literacy skills.

"Half the teens who use search engines to look for health information say they usually just click on the first site that comes up," she said. "We need to focus on improving their digital literacy skills so that they can sort through the abundance of information they come across online." She said she would also like to see some of the more popular health websites create sections that cater specifically to adolescents.

"Teens from lower-income families have limited access to computers and mobile devices at home, and, therefore, to health information that could benefit them and their families," she said.