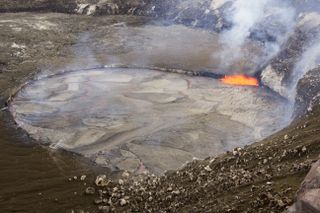 The lava lake in Kilauea volcano on April 26, 2015. This is the highest the lava lake has reached during the current summit eruption.
(Image: © USGS)

The roiling lava lake atop Hawaii's Kilauea Volcano is threatening to overflow for the first time since the molten pool appeared in February 2010.

The lava lake usually hides out of tourists' sight by hovering about 100 feet (30 meters) below the rim of Overlook crater, which lies inside of the bigger Halemau'mau' crater at Kilauea's summit. The 720-foot wide (220 m) Overlook crater emerged with a stupendous blast on March 19, 2008.

But last week, on April 22, lava started rising steadily and is now hovering within 10 feet (3 m) of the crater's edge. Lava briefly touched the crater rim this morning (April 28), according to the U.S. Geological Survey's Hawaiian Volcano Observatory.

Volcano experts say the lava lake could overflow anytime this week. If the lake does flood into Halemau'mau' crater, the deep, wide depression would contain the molten rock, and the lava would not pose an immediate threat to any structures. But visitors to Hawai'i Volcanoes National Park would enjoy a stunning view from an overlook at the Jaggar Museum. [See Photos of Hawaii's Rising Lava Lake]

"There is definitely a possibility it could overflow," said Matt Patrick, a geologist at the volcano observatory.

When falling rocks tumble onto the hot lava, the impact sends fountains and spatters of lava into the air. To watch, view one of the observatory's six live webcams. Today, a rockfall sent lava shooting about 325 feet (100 m) into the air while scientists were installing a new webcam, Patrick said.

Kilauea's lava lake is one of the biggest on Earth, second only to Nyiragongo volcano's lava lake, in the Democratic Republic of the Congo. Kilauea's lake is 560 feet by 720 feet (170 m by 220 m) in size.

The lake surface rises and falls daily and hourly, as gas builds up and releases inside the lava. When the lake burps, the level drops. When the volcano has indigestion, the lake inflates.

On a longer time scale, the lake height can change as much as 65 feet (about 20 m) in an hour and 165 feet (50 m) in one day, according to the USGS. When new molten rock flows into the summit's underground magma reservoir, the volcano's surface bulges just a little bit, called inflation. This added pressure makes the lava lake's surface swell. When lava leaves the magma chamber, such as during an eruption, the lake deflates like n leaking balloon. "The lava lake exactly tracks the inflation and deflation state of the summit. It acts like a liquid barometer of the summit magma chamber," Patrick said.

This is not the first time a lava lake has paved the floor of Kilauea's summit crater. In the early 1900s, a long-lived lava lake also erupted into Halemau'mau' crater.