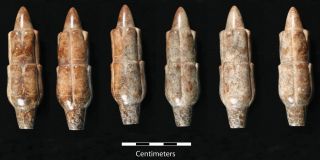 The jade artifact, which has cleft rectangles, incisions and a cone at its top, was discovered underwater in Veracruz, Mexico.
(Image: © Photo courtesy Professor Carl Wendt)

A mysterious corncob-shaped artifact, dating to somewhere between 900 B.C. and 400 B.C., has been discovered underwater at the site of Arroyo Pesquero in Veracruz, Mexico.

Made of jadeite, a material that is harder than steel, the artifact has designs on it that are difficult to put into words. It contains rectangular shapes, engraved lines and a cone that looks like it is emerging from the top. It looks like a corncob in an abstract way archaeologists say.

It's an "extraordinary and unusual archaeological specimen made of mottled brown-and-white jadeite," the team wrote in an article published recently in the journal Ancient Mesoamerica. [Mesoamerica Gallery: Images of 'Alien' Skulls Reveal Odd Ancient Tradition]

Jack Hunter, a diver with the Arroyo Pesquero archaeological project, discovered the artifact in 2012 while diving with Jeffery Delsescaux about 2 to 3 meters (6.6 to 9.8 feet) below the surface of a deep stream.

"Underwater conditions were particularly challenging and included near-zero visibility and many obstructions, including large logs, smaller debris, partially decomposed leaves and other vegetation," the team wrote.

The artifact dates to a time when a civilization now called the Olmec flourished in the area. The Olmec people built stone statues of giant human heads and constructed a city now called "La Venta" about 10 miles (16 kilometers) northeast of Arroyo Pesquero. The city, which may have supported some 10,000 people, contained a 112-foot-high (34 m) pyramid.

The artifact, which measures 8.7 centimeters high by 2.5 centimeters wide (3.4 inches by 1 inch) at its widest point, is tricky to decipher.

"The iconography is pretty difficult to interpret; it's definitely not clear," said Carl Wendt, a professor at California State University, Fullerton who is directing the project. "It seems to be an abstract representation, I believe, of a cob of corn," he said. Corn, along with beans and squash, was an important part of the diet for people in ancient Mesoamerica.

The artifact may have had several uses. "While it certainly could have once been the handle of a bloodletter, in its current form, we argue that it probably would have been attached, as a finial, to a staff and functioned as a symbol of power and authority," the team wrote in the article.

In the end, the artifact may have been placed in the stream as an offering, Wendt said. The offering could have been connected to deities, ancestor veneration or magic, he added. Over the past 50 years thousands of artifacts have been found at the site and they may have been left as offerings, archaeologists say.

The site where the artifacts were found is a place where freshwater intersects with saltwater, Wendt said, noting that jellyfish from the ocean can get into the stream during heavy rain. To the Olmec, this intersection of freshwater and saltwater may have had great importance.

"While having practical importance today as a spot to collect freshwater, in Olmec times, the confluence would also have been important for symbolic and cosmological reasons, and an ideal place for a ritual hoard or votive offerings," the team wrote in the journal article.

So far, the archaeologists have found no buildings at Arroyo Pesquero that date to between 900 B.C. and 400 B.C. (when the offerings were made). Rather it is the water that is important the researchers said.

"Freshwater, so critical to daily life, was relatively scarce in a region of stagnant swamps," the team wrote. "It is no wonder that springs and other freshwater sources were sacred places, and sacrificing [objects] at them was an important part of Olmec ritual."

Wendt co-founded the Arroyo Pesquero archaeological project in 2005 so that the site could be studied scientifically. While thousands of artifacts have been found at the site over the past 50 years many lack details about their origins. Some of them were found by looters and are in private collections.