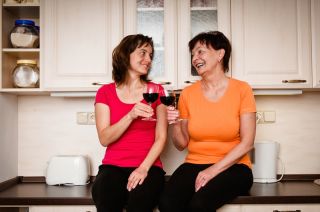 Men generally drink more alcohol than women, but the genders go through similar changes in their drinking habits over their lifetimes, a new study on people in the United Kingdom finds.

Both men and women in the study reported a sharp uptick in alcohol intake during adolescence that peaked in early adulthood, plateaued in midlife and then declined into older age.

But the researchers also found that, although younger guys drank the largest quantities of alcohol, it was older men who drank the most often, "with lots of men drinking on a daily basis in later life," said lead researcher Annie Britton, a senior lecturer of epidemiology at University College London.

It's concerning that many older men report drinking daily, she said. It could mean that they are becoming dependent on alcohol, she told Live Science. What's more, alcohol can interfere with some medications that are commonly used by older people, such as drugs for blood pressure and pain relief. [How 8 Common Medications Interact with Alcohol]

For the new findings, the researchers pulled data from nine previous studies that included a total of nearly 60,000 people and spanned a 34-year period, from 1979 to 2013. The new study is the first to pool extensive data on drinking behaviors from such a large group of people over a long period of time, according to the findings, published online today (March 5) in the journal BMC Medicine.

Women's intake was on average less than men's — a finding that was "no surprise," Britton said. Women in the study were also more likely than men to say they drank only once a month, or on special occasions, the researchers found.

The researchers also looked at drinking frequency, or how often people drank. Drinking frequency increased during middle age, meaning that people — especially men — tended to drink daily or on most days of the week. But frequent drinking declined in very old age, the study showed.

The new study didn't explore the reasons behind these drinking habits, but other studies show that people generally reduce their alcohol intake as they age because of health concerns, weight issues or because they attend fewer social events, Britton said.

"Other people told us they increased their consumption to help them sleep, because they were depressed [or] lost a loved one," Britton said.

Though the study only looks at people in the United Kingdom, it can help researchers identify what groups of people may be putting their health at risk, she said.

Still, "These findings in the U.K. are very similar to the U.S.," said Dr. Mark Willenbring, the former director of the Division of Treatment and Recovery Research of the National Institute on Alcohol Abuse and Alcoholism at the National Institutes of Health (NIH) in Bethesda, Maryland. He is now the founder and CEO of the addiction treatment center Alltyr in St. Paul, Minnesota.

However, the United States likely has more nondrinkers than the United Kingdom, he said. The new study found that less than 10 percent of people in the United Kingdom study were abstinent until age 90, when abstinence rose to above 20 percent, the researchers said.

"There's a lot more abstinence in the U.S.," Willenbring said. Middle-aged adults in the United States also probably drink less frequently than those in the United Kingdom, he noted.