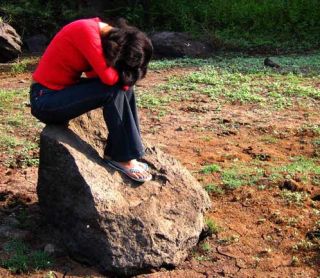 Breaking up can be tough on the heart, but it's not as emotionally taxing as we would predict, a study finds.
(Image: © dreamstime.)

Score one for resilient types who keep things to themselves.

Contrary to popular notions about what is normal or healthy, new research has found that it is OK not to express one's thoughts and feelings after experiencing a collective trauma, such as a school shooting or terrorist attack.

In fact, people who choose not to express their feelings after such an event may be better off than those who do talk about their feelings, said University at Buffalo psychologist Mark Seery, lead author of the study detailed in the June issue of the Journal of Consulting and Clinical Psychology.

Seery investigated the mental and physical effects of collective traumas on people who are exposed to a tragedy but who do not experience a direct loss of a friend or family member. He focused on people's responses to the terrorist attacks of Sept. 11, 2001.

"To the extent that other collective traumas are similar to 9/11 in that many people are exposed though intense media coverage, even if they do not experience direct loss, there is reason to think these results could generalize to other events," Seery told LiveScience.

The findings have implications for expectations of how people should respond in the face of a collective trauma affecting a whole community or even an entire nation.

Seery says the results should not be interpreted to mean that expressing one's thoughts and feelings is harmful or that if someone wants to express their emotions they should not do so.

"It's important to remember that not everyone copes with events in the same way, and in the immediate aftermath of a collective trauma, it is perfectly healthy to not want to express one's thoughts and feelings," he said.

Assumption that talking is better

Seery points out that immediately after last year's tragic shootings at Virginia Tech University there were many "talking head" psychiatrists in the media describing how important it was to get the students expressing their feelings.

"This perfectly exemplifies the assumption in popular culture, and even in clinical practice, that people need to talk in order to overcome a collective trauma," Seery said.

"Instead, we should be telling people there is likely nothing wrong if they do not want to express their thoughts and feelings after experiencing a collective trauma," he said. "In fact, they can cope quite successfully and, according to our results, are likely to be better off than someone who does want to express his or her feelings."

Surprise on who was better off

Seery and co-researchers tested people's responses to the terrorist attacks, beginning immediately after the event and continuing for the following two years. Respondents were given the chance to express their thoughts and feelings on that day and a few days afterward. The analysis drew in part from 1,559 responses to an open-ended question about one's "thoughts on the shocking events of today" emailed on Sept. 11, 2001, to a large randomly generated national sample,

The researchers then compared people who chose to express their thoughts and feelings versus those who chose not to express, focusing on such measures as whether they had any post-traumatic stress symptoms, their physical health and generalized distress.

If the assumption about the necessity of expression is correct — that failing to express one's feelings indicates some harmful repression or other pathology — then people who chose not to express should have been more likely to experience negative mental and physical health symptoms over time, the researchers said.

"However, we found exactly the opposite: people who chose not to express were better off than people who did choose to express," Seery said.

"We assessed various alternative explanations in secondary analyses, but nothing else accounts for this effect," Seery said.

The research project was funded by the National Science Foundation and Roxane Cohen Silver.