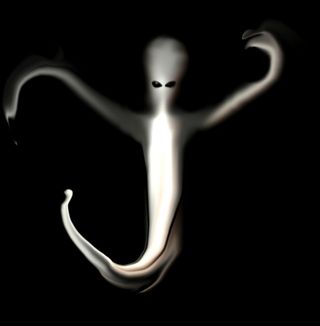 Belief in Aliens Can Turn Deadly

A Denver man named Jeff Peckman wants to spend $75,000 in taxpayer money to deal with aliens, and not the illegal kind. He wants the City of Denver to create an "Extraterrestrial Affairs Commission" that would handle the problem of alien encounters. It’s unclear what, exactly, that is, but perhaps those who have been anally probed by aliens would receive counseling or victims' assistance funds. But here's where the story gets strange. To publicize his efforts, Peckman held a press conference on May 30 announcing that he had definitive proof of alien visitation. This came in the form of a short video clip shot in Nebraska by a man named Stan Romanek in July 2003. At the time, Romanek was concerned that neighborhood Peeping Toms were looking at his teenage daughters. The best solution Romanek could think of was to place a video camera inside the house, aimed at a window. He taped several nights, and to his shock and amazement, the Peeping Tom was not a horny local teen but instead an extraterrestrial! Yes, Romanek claims that an alien traveled across the universe to stop by his house and look through his window at his daughters. The video footage seen at the press conference shows a dark window, behind which a strange, indistinct head pops up and down several times. Even assuming that the video actually depicts some mysterious, humanoid creature (instead of, say, a hoax or prankster), it's not clear how Peckman or Romanek could conclusively identify it as an alien. It could just as well be any number of other creatures; in fact, the evidence Peckman provides is exactly as good for the video being of an alien as an elf, a leprechaun, a chupacabra or even a Bigfoot. This is of course not the first time that such creatures have been sighted among us. In March, the British newspaper "The Sun" reported that a small town in Argentina was terrorized by a creepy gnome. Not only that, but there was poor quality video footage of it that made the rounds on YouTube. Was it a dwarf in a pointy hat? Was it a puppet, or good animation? Or was it really a lawn gnome that had magically come alive? Then there was the infamous "alien autopsy" film that aired on Fox television in 1995, purporting to be actual archival footage of aliens that died in the Roswell Crash in 1947. It was heavily publicized, and later revealed as a hoax. Ironically, Peckman's video itself is far less mysterious than how he managed to get 30 reporters at the press conference — not to mention national media attention — for a five-year-old, third-hand "alien" video that makes most Bigfoot films look like "Citizen Kane."

Benjamin Radford is managing editor of the Skeptical Inquirer science magazine. He wrote about the media and pop culture in his book" Media Mythmakers: How Journalists, Activists, and Advertisers Mislead Us." This and other books can be found on his website.