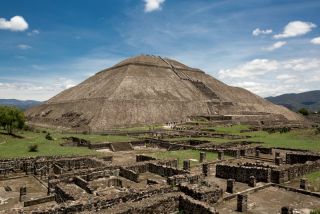 The Pyramid of the Sun in the ancient city of Teotihuacan with ruin walls in the foreground.
(Image: © Barna Tanko | Shutterstock.com)

Ancient pottery confirms people made and drank a milky alcoholic concoction at one of the largest cities in prehistory, Teotihuacan in Mexico, researchers say.

This liquor may have helped provide the people of this ancient metropolis with essential nutrients during frequent shortfalls in staple foods, scientists added.

The ancient city of Teotihuacan, whose name means "the city of the gods" in the Nahuatl language of the Aztecs, was the largest city in the Americas before the arrival of Christopher Columbus. At its zenith, Teotihuacan encompassed about 8 square miles (20 square kilometers) and supported an estimated population of 100,000 people, who raised giant monuments such as the Temple of Quetzalcoatl and the Pyramids of the Sun and the Moon.

Much about Teotihuacan remains unknown, including the origin and language of the people who lived there. To shed light on the mystery of this ancient city, scientists investigated what the people there might have eaten and drank. [In Photos: Human Sacrifices Discovered in Ancient City of Teotihuacan]

Corn, also known as maize, was a key crop for the people of Teotihuacan, but the low rainfall and limited groundwater resources of the area made growing maize there risky. In addition, while maize is high in calories, it contains only low concentrations of several vital nutrients, such as iron, calcium and B vitamins.

Murals in Teotihuacan depict agave plants, which are also known as maguey plants and physically resemble aloe. A number of these paintings may also depict scenes of people drinking a milky alcoholic potion known as pulque, which is made from maguey sap. (Tequila is also made from agave plants, but these liquors are made from the baked hearts of these crops, not the sap.)

Prior studies hinted that pulque might have helped keep people in Teotihuacan alive. Maguey withstands frost and drought better than maize, and pulque could have provided vital calories, most essential nutrients and probiotic bacteria.

To learn more about the diet and culture of the people of Teotihuacan, scientists analyzed more than 300 sherds, or fragments, of pottery from within and nearby the city that dated to between about A.D. 200 and 550. The researchers cleaned and ground up the potsherds, and then scanned the resulting powder for any materials that the gotten unglazed ceramic might have absorbed. They focused on residues of the alcohol-making bacterium Zymomonas mobilis, which gives pulque its punch.

The scientists discovered 14 sherds with the earliest direct chemical evidence for the making of pulque in Central America. Researchers found that this fermented maguey sap may have been stored in distinctive, vaselike pottery vessels that were sealed with pine resin, as well as in other less-specialized vessels.

"These findings are a critical first step in providing new information about the subsistence patterns of the inhabitants at Teotihuacan that could not have been gathered using traditional archaeological methods," Correa-Ascencio said.

In its future research, the teamwill analyze ancient potsherds from other areas in Central America for similar residues, Correa-Ascencio said. She and her colleagues detailed their findings online Sept. 15 in the journal Proceedings of the National Academy of Sciences.