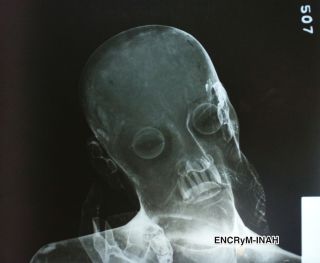 When scientists X-rayed a Jesus statue (Christ of Patience) in a small town in Mexico, they found it held real human teeth.
(Image: © ENCRyM-INAH)

A Jesus statue that has lived an unassuming life in a small town in Mexico for the last 300 years has been hiding a strange secret: real human teeth.

Exactly how the statue of Jesus awaiting punishment prior to his crucifixion got its set of choppers is a mystery.

But the statue may be an example of a tradition in which human body parts were donated to churches for religious purposes, said Fanny Unikel Santoncini, a restorer at the Escuela Nacional de Restauración, Conservación y Museografía at the Instituto Nacional de Antropología E Historia (INAH) in Mexico, who first discovered the statue's teeth.

"We have to remember that these people were very, very religious. They believed absolutely that there was a life after death and this was important for them," Unikel told Live Science. [See Images of the Jesus Statue with Human Teeth]

At first glance, the Christ of Patience — which depicts a seated, bloody Jesus gazing sadly off into the distance — doesn't look that different from statues found throughout the country. The painted wooden figure, which dates to the 17th or 18th century, wears human clothes and a wig, and was sculpted with a blend of European techniques and local materials, Unikel said.

"In Mexico, there are many statues like this — not only Christ, but Saints, the Virgin Mary," Unikel said.

Using human and animal body parts for statues isn't unusual either. People routinely donated hair to serve as wigs for statues, and artists often used nails fashioned from the shaved horns of bulls, she said.

Statues in Mexico are known to include false teeth made from animal bone — either with all the teeth carved from one solid piece of bone, or with individual, square-shaped teeth. A statue of the devil may be given a set of dog's teeth, and the team has even restored a baby Jesus statue with two baby rabbit teeth sprouting from its gums, Unikel said. But though there were rumors about a few statues containing human teeth, Unikel had never seen one.

The discovery happened by accident, when the Christ of Patience was taken, along with several other statues, to be restored by the INAH researchers.

As part of their restoration work, Unikel and her colleagues took X-rays of the statues. The anthropologist on the team noticed something unusual: real human teeth.

"We said 'Ah, it's not possible!'" Unikel told Live Science. "She said, 'I am absolutely sure about this.'"

The pearly whites seemed to be in good condition, with even the roots present. The finding is even stranger in that someone would donate such healthy teeth for the statue given that the statue's mouth is barely open, and the teeth aren't even visible unless someone peers inside, Unikel said.

The teeth could have come from living or dead people, but with no available documents describing the statue, scientists and restorers will have a tough time tracking down the original owner. One possibility is that a particularly devout parishioner, or even many different people, donated the teeth. Another possibility is that someone extracted the teeth from an unwilling victim, but if so, the sculptor would never have revealed that fact, Unikel said. [Religious Mysteries: 8 Alleged Relics of Jesus]

Donating body parts to a church or religious cause was common practice during the late 17th and 18th centuries. For instance, the Bishop of Guadalajara, Obispo Manuel Fernández de Santa Cruz, donated his heart to the nuns of Convento de Santa Mónica de Puebla after he died in 1699. The heart was visible in a monstrance that only the nuns could see, Unikel said. And a Spanish government minister, Viceroy Baltazar de Zúñiga, Marquez de Valero also donated his heart to a convent of nuns, she said.

"For us, it seems mad," Unikel said, referring to people in modern times. But "the way they thought about the body was different from ours."

Now the researchers would like to find out more about the mysterious person or people who donated these teeth. Though they can't remove the teeth from the religious statue, the researchers hope to study them more carefully to figure out the age and sex of the teeth's owners, she said.