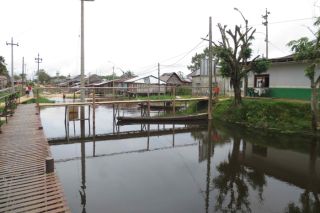 At times of year when the river is inundated in Iquitos, Peru, people can take a boat straight to their house. It is a time when social contact is reduced and the spread of dengue fever may be less of a threat.
(Image: © Emily Griffiths)

Emily Griffiths is a post-doctoral researcher in NC State's Department of Entomology. She also writes Emily’s Dengue Blog, and contributed an article to This is What Science Looks Like at NC State, which inspired this post. Griffiths contributed this article to Live Science's Expert Voices: Op-Ed & Insights.

Have you ever gotten sick while traveling? It's likely that just the threat of exotic diseases prompted you, like many travelers, to get vaccinations, take pills and go through all manner of other steps to protect your health. Travelers who don't take such measures may be more likely to not only get sick, but to spread disease to other people.

Like Ebola, there is no dengue vaccine or drug on the market, so travelers can only try to protect themselves by avoiding contact with the infection. For Ebola this would involve not touching wounds or corpses, but for dengue, it means avoiding mosquito bites. In the period since World War II, fast, international, air travel has ballooned — and with greater travel, dengue fever has spread around the tropics and subtropics. This makes dengue a more extensive problem than Ebola. [5 Viruses That Are Scarier Than Ebola ]

In my work, I grapple with issues of how people differ in their travel and infection histories, and how those factors affect the spread of dengue fever. I'm one of many researchers pondering how to incorporate travel into computer models of disease, which is necessary for guiding decisions about who and where to focus efforts for dengue surveillance and control.

When thinking about infectious diseases, people look for patterns that highlight an individual's average likelihood of exposure — such as the one in 10 chance of being susceptible to seasonal flu each winter. But for most people, such general statistics are bogus. People differ, and often there are patterns to those differences. For example, frequent flyers will be more likely to come into contact with droplets of flu virus than a hermit who never leaves home.

In the city in Peru where we focus our dengue research, people's regular travel patterns vary. They can include home, school, a friend’s house, and home again; zipping between multiple homes and multiple workplaces; or, even leaving the city on a trip for a couple of days at a time. Some people walk, others take a mototaxi or boat, and a minority have air-conditioned cars.

People also have inherent differences that can affect their susceptibility to disease. I spend a lot of my time thinking about how differences between people might be important to health, especially those characteristics that help distinguish individuals with high risk of disease from mosquitoes. At a minimum, to model the spread of something like flu, I would need to consider each person's immune response, and how many people those individuals come into contact with.

Mosquitos, proximity and the spread of dengue

Let’s think of an everyday scenario. If a mosquito bites a person with dengue in a shop, then a lot of the people visiting that same shop may live or work in the area. Maybe the church nearby is frequented by a slightly different bunch of people, and the school next door has an even wider catchment. If we track the mosquito during its infection cycle, it might stay in the shop or move to another location. Disease spread will depend on where houses, shops and schools are, and how often people visit them.

I'm currently building a computational model that can simulate the complex social geography in a city in order to track the spread of dengue over multiple years. This expands on another detailed mosquito model developed at NC State called Skeeter Buster.

In the new model, I've included information on how aspects of disease vary between individuals — like how long dengue infection lasts, or how often mosquitoes try to suck blood. A lot of scientists are working on studying these things in more detail so that we can make better predictions of how many people might get sick. There are probably other important differences between individuals that for whatever reason (logistical, political, financial) remain unstudied.

An illustration of such complexity is Iquitos, Peru. I recently visited this Amazonian city where we have collaborators doing impressive dengue research. A river separates two neighborhoods in Iquitos during half the year — the other half of the year, the river subsides and people can walk across the sand. Standing on a bridge above that river, I have wondered what difference river inundation makes to disease risk: In the low season, people might walk more between neighborhoods and spread more disease, but in the high season people are less well-connected and might eat more fish that may boost their immune systems. The causes of seasonal patterns of disease like dengue are a big puzzle. My hope is that we can use models to test the implications of complex factors, like seasonal travel between neighborhoods, on the spread of dengue.

Thinking of members of the transnational community (like myself) poses another challenge. Researchers are putting a lot of effort into& surveying how citizens in Iquitos live and how often they get diseases from mosquitoes. Iquitos is fairly isolated being in dense jungle and only accessible by boat or plane. But there are foreign nationals who visit the city for tourism, conservation, and science who might not have encountered local diseases before, or who might bring new diseases in from overseas.

Transnationals are, by nature, a transient group of individuals who are hard to survey. They might have complicated travel and medical histories, and might not be the target of local health interventions. Currently, in my model I assume that these people act like locals, but it might be nice to add in some differences in the future, such as how many months they spend out of the city, potentially bringing new types of dengue back.

My research is unlikely to generate specific suggestions for travelers visiting areas with dengue, but it will reveal areas where public health benefits are most likely within a landscape where many people travel. One key advantage of simulation models is that as issues surface, scientists can use them to test how including or excluding a new feature might alter disease estimates. Integrating uncertainty into the evidence base is the main motivation behind my ongoing modeling work.

As a researcher, I'm always asking questions — it’s vital that we approach disease models with this kind of critical thinking, especially when the outcomes of models are so critical for informing public health.