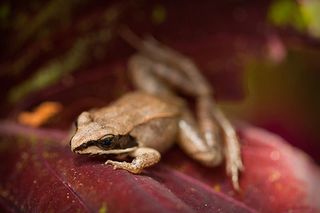 Wood frogs such as this one are highly susceptible to ranavirus, especially as tadpoles.
(Image: © "Wood Frog" by DDauri Daniel D'Auria - Own work. Licensed under Creative Commons Attribution-Share Alike 3.0 via Wikimedia Commons )

A virus lethal to wood frog tadpoles may be partly responsible for the alarming and widespread extinction of amphibians seen in recent decades.

The results help fill out the picture of what is happening to the world's amphibians. According to the International Union for Conservation of Nature — which evaluates species' vitality and threat levels in its Red List of Threatened Species — amphibians are the most imperiled of vertebrates, with one third of them classified as globally threatened or extinct. Scientists have linked the decline of amphibians to a fungal disease called chytridiomycosis, but the new study shows ranavirus may be a culprit as well.

Earl and her team determined that the stage at which frogs were exposed to ranavirus was a critical factor in determining extinction and rates of decline. Extinction was most likely to occur when tadpoles and "metamorphs" — tadpoles metamorphosing into frogs — in small communities were exposed to ranavirus at frequent intervals. Small populations exposed every year could become extinct in five years; small populations exposed every two years could become extinct in 25-44 years.

Exposure at the egg stage was apparently not as dangerous, perhaps because of protection afforded by the membrane.

Once exposed to ranavirus, a wood frog can die within three days. It can catch the virus in the water, through direct contact with infected frogs and when scavenging dead and infected frogs. There is no cure or treatment for the disease.

The study appeared in the journal EcoHealth.

Earl is continuing to look at amphibian decline: She recently built mathematical models to investigate whether immigration of frogs into a population from other areas alters the probability of extinction and decline.

The National Institute for Mathematical and Biological Synthesis brings together researchers from around the world to collaborate across disciplinary boundaries to investigate solutions to basic and applied problems in the life sciences.