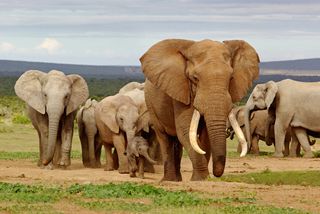 Earth may be in the early stages of a sixth mass extinction, an international team of scientists says.

Animals and plants are threatened. More than 320 land vertebrates have gone extinct since 1500, the researchers said. The world's remaining animals with backbones are 25 percent less abundant than in 1500— a trend also seen in invertebrate animals, such as crustaceans, worms and butterflies, the scientists reported.

The previous mass extinction, which wiped out the dinosaurs, happened about 65 million years ago, likely from a catastrophic asteroid that collided with Earth. In contrast, the looming sixth mass extinction is linked to human activity, Rodolfo Dirzo, a professor of biology at Stanford University in California, said in a statement. Dirzo is the lead author of the new review of past research on the topic, which suggests Earth is in the early days of this sixth mass extinction.

A past study, which involved data from the fossil record and modern-day conservation biology, suggested Earth could enter such a mass extinction within the next 300 to 2,000 years. That study was detailed in the March 2, 2011, issue of the journal Nature.

Up to one-third of all vertebrates are threatened or endangered, the researchers said. Large animals — such as elephants, rhinoceroses and polar bears — have the highest rates of decline, which is a trend shared by other mass extinctions. These large animals are at particular risk because they tend to have few offspring and low population growth rates. Hunters and poachers, however, find their fur, meat, tusks or horns attractive targets. [7 Iconic Animals Humans Are Driving to Extinction]

Losing a species of large animal can have unexpected effects on the ecosystem and nearby human developments, a process known as defaunation. In one study, researchers isolated patches of land from animals, including zebra, giraffes and elephants. Without the animals, the grass and shrubs grew tall, and the soil became looser. Rodents quickly took over and doubled in numbers, eating the seeds from the plants and living in the patchy soil that was relatively predator-free.

Rodents can carry diseases and parasites that infect people, the researchers said.

"Where human density is high, you get high rates of defaunation, high incidence of rodents and thus high levels of pathogens, which increases the risks of disease transmission," Dirzo said. "Who would have thought that just defaunation would have all these dramatic consequences? But it can be a vicious circle."

Research by Stuart Pimm, a biologist at Duke University, put a number on how fast species are now becoming extinct. His study, published May 29 in the journal Science, suggested that while one species, on average, went extinct per every 10 million each year before humans came onto the scene, that number has soared to between 100 and 1,000 species.

Stopping, or at least slowing, the sixth mass extinction will take time and collaboration. For example, people need to protect vital habitats and tailor their approach to fit each unique region; raising awareness may speed up these efforts, Dirzo said.

"We tend to think about extinction as loss of a species from the face of Earth — and that's very important — but there's a loss of critical ecosystem functioning in which animals play a central role that we need to pay attention to as well," Dirzo said.

The review was published July 25 in the journal Science.