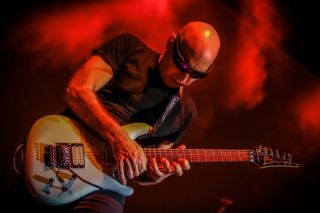 How do great guitarists bend a string like Eric Clapton or Jimi Hendrix? One scientist sought to figure out how legendary performers make great music.

"Very good guitarists will manipulate the strings to make the instrument sing," David Robert Grimes, a physicist at Oxford University, in England, who plays guitar and was a member of a band in Dublin, Ireland, said in a statement.

The physics of string instruments is fairly well understood, but "I wanted to understand what it was about these guitar techniques that allows you to manipulate pitch," Grimes said. [The Mysterious Physics of 7 Everyday Things]

Grimes, who normally works on mathematical models of oxygen distribution in radiation therapy for cancer, spent his spare time crafting equations for various guitar techniques, including bending (pushing the strings up or down), tapping (hitting the strings), vibrato (moving the wrist back and forth to change a string's tension) and whammy bar action (a mechanical form of vibrato). His findings are detailed today (July 23) in the journal PLOS ONE.

Grimes came up with the equation for string bends experimentally, by measuring the pitch of notes produced when he bent the strings at different angles. He took one of his oldest guitarsto the engineering lab at Dublin City University, where he held a position previously, and asked a colleague to strip it down for his experiments.

"He was a musician too and looked at me with abject horror," Grimes said. "But we both knew it needed to be done — we put some nails into my guitar for science."

Guitar string properties can dramatically affect the pitch of a note, Grimes found. Specifically, the thickness of a string, as well as the amount the string stretches under force (known as the "Young's Modulus"), played important roles.

In guitar playing, a hammer-on is when the player hits a string with their finger to play a note. A pull-off is the opposite: plucking the string off the fingerboard. Grimes figured out that the difficulty of these techniques depends on the heights of the guitar strings above the fingerboard.

These musical phenomena are fairly straightforward, he said, but they're still "a cool way of studying some basic physics principles." These findings could be useful for guitar string manufacturers and people who model digital instruments, he added.

Grimes said he has a few guitar heroes of his own, who have mastered the techniques he studies. Still, "I think the only person I ever wrote fan mail to was Brian May of Queen," he admitted.