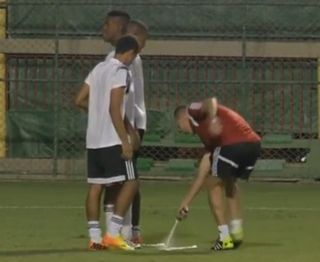 The 2014 FIFA World Cup is the first to use the so-called vanishing spray to ensure fair play.
(Image: © Screenshot, AOL)

If you're watching the FIFA World Cup this year, you may have seen a free kick where the referee took out a spray can and proceeded to draw a line on the grass in front of the players.

No, it's not shaving cream. It's "vanishing spray," an aerosolized substance that provides a temporary visual aid to ensure that, during a free kick, the defenders and the kicker don't encroach on the 10-yard (9.1 meters) separation mandated by game regulations.

The foaming spray, which vanishes after about a minute, has been used for several years in Major League Soccer, the professional soccer league in the United States and Canada, but is being used for the first time at the 2014 World Cup, CNN reported. Stunning Soccer: The World Cup 2014 from Space (Photos)]

The tendency for the wall of defenders to creep forward during a free kick is a common cause of dispute in the beloved ballgame. Referees carry the spray with them, but are not required to use it. However, players must abide by the 10-yard regulation with or without the spray, according to regulations.

Argentinian journalist and entrepreneur Pablo Silva developed a commercial version of the spray called "9:15 Fairplay," a reference to the metric equivalent of the free-kick distance requirement.

"We find the vanishing spray to be extremely useful and very effective in ensuring the defenders are 10 yards from the ball," Paul Rejer, training and development manager for the Professional Referees Organization, told CNN.

The vanishing spray contains a mixture of butane, isobutane and propane gas; a foaming agent; water; and other chemicals. When it leaves the can, the gas depressurizes and expands, creating small, water-covered droplets on the field. The butane mixture later evaporates, leaving only water and surfactant residue behind.

Use of the spray at the World Cup ignited quite a buzz on Twitter. "Please tell me I'm not the only one with [a] strange fascination with the magical spray paint [they] use before free kicks," tweeted @EmmaBlahh. "It wasn't the vanishing spray [I] was impressed with, it was more the flamboyancy with which it was administered," tweeted @MickCityTalk.

The foaming spray is one of several innovations at this year's World Cup. Other new tech includes a robotic exoskeleton that was showcased at the tournament's opening ceremony, new goal-line technology and perhaps the most advanced soccer ball ever developed.