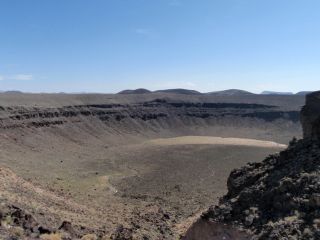 Lunar Crater maar in Nevada, a maar-diatreme volcano. A new study is shedding light on the explosive mechanism of these volcanoes, which erupt just once before dying.
(Image: © Greg Valentine)

When geologists want to study erupting volcanoes, most head straight to the fiery source — a belching peak. But volcanic maar craters, which result from violent underground explosions, aren't very safe to watch. Maar eruptions are also rare and hard to predict, so scientists often can't arrive before nature's show starts.

Instead, to gain a better understanding of unique maar craters, a group of researchers in New York is blowing up rock piles in the name of science.

"These experiments can give us new insight into real eruptions," said Greg Valentine, a volcanologist at the University of Buffalo.

Valentine estimates he's set off 35 explosions in the past two years at the University of Buffalo's rural geohazards testing site in Ashford, New York.

Maar craters resemble meteorite craters, but instead of destruction coming from the sky, maars are left behind after violent underground steam explosions. A maar forms when magma rising underground meets groundwater. The hot liquid suddenly and violently expands, not unlike a steam bomb. The energies involved are typically bigger than a chemical explosion but smaller than a nuclear bomb, studies suggest. [Big Blasts: History's 10 Most Destructive Volcanoes]

To mimic a maar, Valentine and his colleagues build piles of sand, gravel and other materials, and bury explosive charges. Sometimes, they add Ping-Pong balls to help track materials flung out by the blast with high-speed video cameras.

Valentine's early experiments found that maar craters likely result from multiple small, shallow explosions. Earlier models suggested the explosions grew progressively deeper, as the blasts tossed material out of the crater. These results were published in the journal Geologist in 2012.

A new study finds that most maar craters form from explosions within 650 feet (200 meters) of the surface. The research was published May 14 in the journal Geophysical Research Letters.

This means that, similar to real bombs, below a certain depth, all the explosive energy from the magma-water mixing is fully contained within the earth.

"You can't really have an explosion that's a kilometer deep and eject material out onto the surface because it's all contained," Valentine told Live Science's Our Amazing Planet.

The ultimate goal is to figure out how much energy is involved in a maar eruption, and relate that energy to the amount of magma and the size of the explosions.

"I think we still have a fair amount of work to do," Valentine said. The research team is now far along enough in the experiments to bring the work full circle, and take their experimental observations to a real-world setting. Valentine plans to start a research project at Colorado's Dotsero Crater, where researchers will map the rocks at the volcanic maar and compare them with the explosion tests.

"We can look at the crater and the deposits around the crater, and try to relate that to data we get from our experiments," he said.

Although maars aren't nearly as frequent an eruption risk as bigger volcanoes, their violent, unpredictable nature does make them a hazard for nearby communities.

Maars have erupted in New Zealand, Japan, Alaska, Mexico and the U.S. Southwest in the past 10,000 years. The most recent maar explosion was in Alaska, in 1977, and Alaska is also home to the biggest maar on Earth.