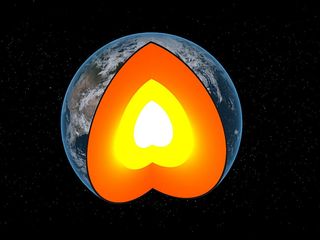 A view inside of the Earth's interior.
(Image: © dreamstime)

A first-time experimental recreation of the crushing, searing conditions within the Earth's lower mantle has led geophysicists to a surprising proposal that there is a new zone of rock within the planet.

The research suggests that a section of the Earth's brittle mantle about 620 to 1,365 miles (1,000 to 2,200 kilometers) deep actually is a "transitional zone" where the rock turns into a strange, incredibly dense state.

"Scientists trying to develop an accurate model of the Earth's interior will need these findings," said Viktor Struzhkin, co-author of the new study and an earth scientist at the Carnegie Institution in Washington, D.C.

He explained that the lower mantle's crushing pressures—at least than 230,000 times that at Earth's surface—cause electrons in iron-containing minerals such as ferropericlase, the second most common mantle material, to behave strangely.

"The deeper you go, the higher the pressures and temperatures become," Struzhkin said. His team crushed and heated ferropericlase to mantle-like conditions with diamond anvils and an intense laser beam generated at Argonne National Laboratory in Illinois.

"Argonne is one of the only places where we could have done this experiment," he told LiveScience, noting that his team achieved temperatures of 3,140 degrees F (1,727 degrees C) and pressures about 940,000 times greater than on our planet's surface.

The pressure was so great under such conditions, he said, that "spinning electrons in iron … are forced to pair up." When the electrons did so, he noted that the mineral's density spiked a little less than 1 percent—a big change considering the rock resting atop the lower mantle already compacts the molecules by about 30 percent.

Struzhkin said that the ultra-compacted minerals help speed up energy waves, such as seismic waves, moving through Earth's interior. The researchers only studied one common mantle mineral, however, and need to see how others behave.

"This paper solves only part of the puzzle," Struzhkin said. "We know there are more surprises to come."

The findings are detailed in the Sept. 21 issue of the journal Science.