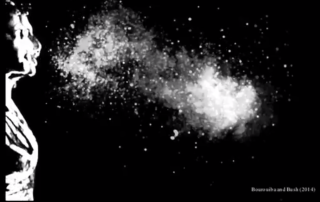 A gross new video could convince people of why they should cover their mouths and noses next time they're about to have an infectious explosion. The researchers who made the video say it shows that coughs and sneezes produce clouds of droplets that travel much farther than thought.

"When you cough or sneeze, you see the droplets, or feel them if someone sneezes on you. But you don't see the cloud, the invisible gas phase," study researcher John Bush, an applied mathematician at the Massachusetts Institute of Technology, said in a statement.

High-speed imaging revealed that tiny droplets from a cough or sneeze travel five to 200 times farther than they would if they moved as a collection of disparate particles, which was previously suspected. The fact that the infectious droplets travel in clouds means they could spread more easily through ventilation systems, sickening people, the researchers said. [See Video of Sneezing in Slow Motion]

The findings could have implications for how architects and engineers design circulation systems in hospitals, workplaces and airplanes.

The study, aptly titled "Violent expiratory events: on coughing and sneezing," was published online March 24 in the Journal of Fluid Mechanics.