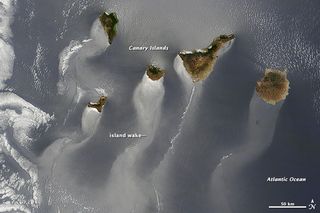 The contest pits the year's best Earth images against each other in a March Madness-like bracket, with the winner picked by popular vote online. NASA's Earth Observatory seeded the bracket with 32 of its favorite images. [Gallery: Top 10 Earth Images from 2014]

The winning shot, named "Trailing the Canaries," was snapped on June 15, 2013, by the Moderate Resolution Imaging Spectroradiometer (MODIS) instrument aboard NASA's Terra satellite. The picture captures milky seas and clouds trailing leeward of the Canaries, a volcanic island chain off Africa's northwest coast. The long cloud tails result from the islands' wind shadow — the volcanic peaks block prevailing winds from the northeast. The striking sea color patterns come from alternating rough and smooth patches, which change how sunlight reflects off the surface, according to the Earth Observatory. The collision between land and wind creates local turbulence, kicking up choppy water.

Volcanoes were a hot pick in this year's tourney, with three of the final four slots nabbed by fiery mountains. The Canary Islands competed for the win against a shot of snowy Klyuchevskoy volcano on Russia's Kamchatka peninsula, but the final seed wasn't much of a battle. The spectacular Canary Island image snared 96 percent of the nearly 50,000 votes, the Earth Observatory said. The other top two images were of Italy's Mount Etna volcano and a global map of nitrogen dioxide pollution from ships.