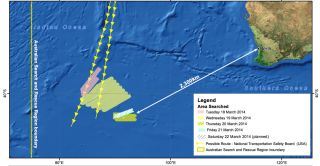 A map showing the area searched in the Indian Ocean for the missing Malaysia Airlines Flight 370, which disappeared from radar screens on March 8 less than an hour after departing, with 239 people onboard, from Kuala Lumpur en-route for Beijing.
(Image: © Australian Maritime Safety Authority)

Two objects that could be parts of the missing Malaysian Airlines jet, which disappeared March 8, were found during a search operation of the southern Indian Ocean, according to officials at the Australian Maritime Safety Authority.

The objects were seen today (March 24) at around 2:45 p.m. local time in Australia (11:45 p.m. EDT on Sunday). A Royal Australian Navy ship, the HMAS Success, was on the scene today, attempting to locate the objects, officials from the Australian Maritime Safety Authority (AMSA) said in a statement. [Facts about Malaysia Flight 370]

In a separate report, a Chinese military aircraft also detected possible objects in the ocean earlier today, but a U.S. Navy P8 Poseidon aircraft that retraced the search area was unable to relocate the potential debris.

Australian officials said the objects reported by the Chinese military were within today's search area, and military aircraft from the U.S., Japan and Australia were all currently active in the region.

As a fifth day of search efforts wrapped up, Malaysian Airlines said it now has to assume "beyond any reasonable doubt" that the missing jetliner and its 239 passengers are lost, reported BBC News. The grim announcement was sent to families of the passengers in a text message, according to the BBC.

In a statement made today, Malaysian Prime Minister Najib Razak said an up-to-date analysis of satellite data indicates the Malaysian Airlines flight ended its journey in the Indian Ocean.

"It is with deep sadness and regret, that according to this new data, flight MH370 ended in the southern Indian Ocean.," Razak said in a televised address.

Over the weekend, a Chinese satellite orbiting Earth captured a new photo of potential objects linked to the missing Malaysian Airlines Flight MH370. The image showed a large object measuring about 72 feet (22 meters) by 43 feet (13 m) in the southern Indian Ocean, about 75 miles (120 km) southwest of a separate possible debris sighting by an Australian satellite last week, according to officials from China's State Administration of Science, Technology and Industry for National Defense (SASTIND).

The Australian Maritime Safety Authority (AMSA) tried to locate the objects seen by the Chinese Earth-observation satellite on Saturday, but was unable to find any debris within the reported search area.

Images from a French satellite showing potential floating objects were also sent to the AMSA over the weekend. The images, produced from satellite-generated radar echoes, or radar signals that provide information about an object's location, show an object or objects floating about 1,430 miles (2,300 km) off the coast of Perth.

The Malaysian Ministry of Transport did not provide additional details about the French images, reported the New York Times.