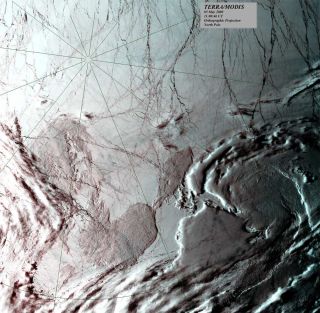 In a move has nothing to do with Christmas, Canada filed its claim Friday (Dec. 6) to the United Nations Commission on the Limits of the Continental Shelf, according to AFP. The claims hinge on the extent of Canada's continental shelf under the Atlantic Ocean — the underwater extent of the North American continent that ends in an abrupt escarpment — and the nation is working to map the continental shelf under the Arctic to bolster their North Pole claim.

Canada's claim will not go unchallenged. Both Denmark and Russia want the Arctic as their own, in part because of sea routes that are expected to open as polar ice melts, and in part because the region holds reserves of oil and gas. A 2008 report by the U.S. Geological Survey suggested the Arctic contains about one-fifth of the world's undiscovered oil and nearly a third of the natural gas yet to be found. [On Ice: Stunning Images of Canadian Arctic]

In response to Canada's claim, Russia promised to step up its military presence in the Arctic, The Guardian newspaper reported. The two countries are squabbling over an undersea mountain range called the Lomonosov Ridge, a 1,200-mile-long (1,900 kilometers) high band of continental crust that crosses the polar region; Russia insists it owns the ridge.

In fact, Russian scientists in 2007 headed to the North Pole to find evidence that the Lomonosov Ridge is a geological extension of Russia; divers aboard mini-subs even planted a flag there on the seafloor of the Arctic Ocean.

Countries bordering the Arctic are currently given rights extending 200 nautical miles from their coasts. Canada's claim would extend its nautical border by about 460,000 square miles (1.2 million square kilometers).