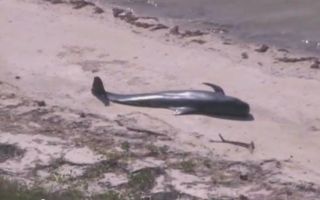 A dead pilot whale in the Everglades National Park on Dec. 4. So far, 10 have died.
(Image: © Associated Press / YouTube)

A group of pilot whales has wandered deep into a remote part of Everglades National Park in South Florida, into an area of shallow water where they are at risk of stranding themselves and dying, according to new reports.

A total of 10 of the whales have already died after getting too close to shore, while 41 are still alive, the Associated Press reported. Six of the whales were found dead while four had to be euthanized, the AP noted. Rescuers attempted to herd the rest into deeper water yesterday (Dec. 4) but failed, park spokeswoman Linda Friar told the AP. "They are not cooperating," she said.

Today wildlife workers have returned to the area to try again. The animals are in about 3 feet (1 meter) of water, which is too shallow for them — they are typically found in much deeper waters, according to news reports. Pilot whales become stranded more than most other cetaceans. That's partially because they stick together in pods, and sometimes an entire group will follow a sick whale to shore and become stranded, researchers say.