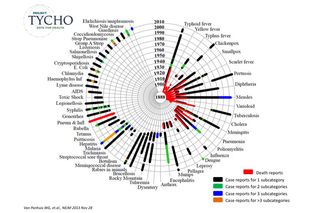 Contagious diseases in the United States from 1888 to the present.
(Image: © Images from van Panhuis, et al.)

Over the last century, U.S. cities, counties and states have reported nearly 88 million cases of 56 different contagious diseases. Researchers at the University of Pittsburgh have now collected, digitized and analyzed those reports to uncover trends related to the availability of vaccines.

"Historical data of this sort is a treasure trove," says Irene Eckstrand of the National Institutes of Health, which partially funded the project through its Models of Infectious Disease Agent Study. "Mining it can show patterns that are really informative about disease transmission dynamics, the impact of interventions and more."

The circular chart maps the incidence of each of the 56 diseases from 1888 to 2011. Concentric circles within the chart mark the decades, and the lines show cases of the disease (black, green, blue, orange) and deaths from it (red).

As the infographic depicts, many deadly infectious diseases of the early 1900s have been eliminated, but some have resurged. New ones have also emerged.

The distribution graphs focus on eight vaccine-preventable diseases: smallpox, polio, measles, rubella, mumps, hepatitis A, diphtheria and pertussis (whooping cough). On each one, the scientists added a vertical red line to show when the vaccine was introduced. For several of the diseases, the line is a like a cliff — there's a prominent and relatively quick drop in incidence, as noted by the color changes from "high incidence" red to "no incidence" black. But for others, particularly mumps and diphtheria, vaccine availability didn't produce such a striking effect. In their paper, the researchers explain that attitudes or policies about vaccine use could have contributed to disease persistence.

The researchers estimate that vaccines prevented a total of 103 million cases of these contagious diseases since 1924.

"This data analysis and modeling activity makes a very compelling case for vaccination in preventing and even eliminating infectious diseases, including those of our time," says Eckstrand.

She and the researchers expect that this effort is the first of many that will use the publicly available database to broadly look at infectious disease trends and to inform a range of important public health discussions. The Pitt researchers named the database Project TychoTM — after the Danish astronomer Tycho Brahe, whose data allowed Johannes Kepler to derive the laws of planetary motion.

The research reported in this article was funded in part by the National Institutes of Health under grant U54GM088491.

See more images from the paper