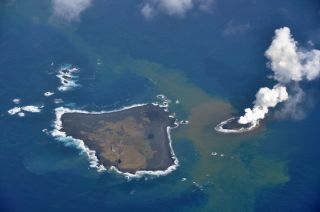 Ash and lava fragments blasting out of the ocean announced the birth of a new volcanic island about 620 miles (1,000 kilometers) south of Tokyo in the Pacific Ocean.

The black cone is the newest member of the Bonin Islands, a chain of tropical and subtropical islands created by volcanic eruptions that includes Iwo Jima.

The eruption was heralded by several moderate earthquakes (around magnitude 4.5) on Nov. 18. Billowing steam and boiling seas appeared on Nov. 20 as the island raised above the sea offshore of Nishino-shima, a small island that marks the summit of a massive underwater volcano, according to the Japanese Coast Guard, which monitored the eruption by air. [Stunning Pictures: Japan's New Volcanic Island]

This is the first time the giant submarine volcano beneath the sea has erupted since a major outpouring in 1973 to 1974 that created another small island, according to the Coast Guard.

Oceanic volcanic eruptions can leave lasting landmarks or vanish beneath pounding waves. The most famous example is Surtsey Island near Iceland, which appeared in 1973. Wind and waves have shrunk Surtsey nearly by half in the past four decades. Without fresh lava, the island could disappear completely.

If the new volcano, which has not yet been named, does erupt long enough to build a permanent island, it could play a role in ongoing territory disputes between Japan and China, according to news reports.

"If it becomes a full-fledged island, we would be happy to have more territory," government spokesman Yoshihide Suga told The Associated Press.