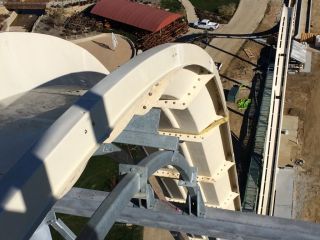 This image shows the view from the first drop from the Verrückt Waterslide currently undergoing construction at Schlitterbahn Kansas City Waterpark. This image was released Nov. 19, 2013.
(Image: © Schlitterbahn Waterparks and Resorts)

Towering 17 stories, the Verrückt waterslide is crazy, literally. Currently under construction, Verrückt, which translates from German as "insane," is taller than Niagara Falls, taller than the Statue of Liberty and twice the height of the tallest wave ever surfed, according to Schlitterbahn Kansas City Waterpark.

The development group behind the slide is keeping the ride's exact height under wraps until spring, but promises it will be taller than the current record holder, Brazil's "Insano." That slide is more than 14 stories tall and reportedly carries riders at more than 60 mph (nearly 100 km/h).

A new advanced nozzle and sensor technology as well as a robust conveyor system were required. Railroad tanker cars were cut and welded to construct the single vertical tower, according to a press release.

The park is expected to open May 23, so adrenaline junkies should plan their trips accordingly.