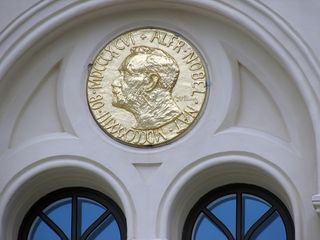 The profile of Alfred Nobel appears on the side of the Nobel Peace Center in Oslo, Norway.
(Image: © Vladislav Gajic | Shutterstock.com)

Since 1901, the awarding of the Nobel Prizes has been among the most closely watched — and, at times, the most controversial — ceremonies in the world. And the 2013 Nobel Prizes, which will be announced over several days beginning Monday (Oct. 7), will not be any different.

Alfred Nobel (1833-1896) established the Nobel Prizes in his last will and testament. Nobel stipulated that prizes should be given in five categories: Physics, Chemistry, Physiology or Medicine, Literature and Peace. In 1968, a sixth category was added: Economic Sciences.

The winners are chosen by the Royal Swedish Academy of Sciences, the Nobel Assembly at Karolinska Institutet, the Swedish Academy and the Norwegian Nobel Committee. The winners are announced in October, and then the prizes are given to recipients in December at a formal ceremony in Stockholm, Sweden; the Peace Prize is awarded in Oslo, Norway. The ceremony takes place each year on Dec. 10, the anniversary of Alfred Nobel's death. [The 10 Noblest Nobel Prize Winners of All Time]

Despite the prestigious nature of the Nobel Prizes — or, perhaps, because of it — the choice of whom to honor has been steeped in controversy. This may be appropriate, because the awards were themselves born in controversy: Alfred Nobel became wealthy through his invention of dynamite and other explosives, many of which were used in warfare, though Nobel was widely known to be a pacifist. Historians believe the prizes were a way for Nobel to ensure his legacy would be about more than death and destruction.

One controversial award was the 1949 prize for Physiology or Medicine, which went to neurologist António Egas Moniz, who developed the prefrontal lobotomy. Another was the 1918 award for Chemistry, given to Fritz Haber, who actively promoted the use of chemical weapons in warfare.

The awards have also been accused of having a left-wing bias, particularly the Peace prize. In 2009, President Barack Obama won the Peace prize, though he had been in office less than 10 months. (Obama himself declared that he did not deserve the award.) And in 2007, Al Gore and the Intergovernmental Panel on Climate Change were awarded the Peace Prize, outraging many political conservatives.