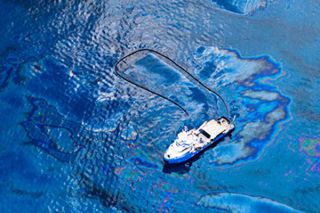 A boat wades through the oily waters of the Gulf of Mexico.
(Image: © Kris Krug via flickr | http://bit.ly/16XKRDu)

(ISNS) -- When 4.9 million barrels of crude oil spewed into the Gulf of Mexico following the April 2010 Deepwater Horizon oil rig disaster, cleanup crews rushed to deploy floating barriers to contain crude oil collecting on the water's surface. However, this did nothing for the oil that never reached the top.

Crews released more than 2 million gallons of an experimental dispersant, Corexit, to break up the underwater oil and prevent it from reaching coast lines. Still, tar balls washed up on beaches lining the Gulf Coast and mixed in with the sandy ocean floor. Corexit didn't remove oil. It only broke it down so that the environment could handle the tiny droplets of dispersed oil. But Corexit may have made the oil more toxic, and killed microscopic marine animals at the bottom of the Gulf, one study found.

Now, researchers at Texas A&M University, in College Station, have developed a non-toxic solution to clean up residual crude oil after bulk removal following a spill. They've designed nanoparticles that soak up underwater oil like millions of tiny sponges and remove it from the environment. Each "nano-sponge" is 100 times thinner than a human hair and can hold more than 10 times its own weight in oil. The particles can be removed from the water after absorption and reused after the oil is removed.

"When I was a Ph.D. student, I remember reading about sludge in the Hudson River," said chemist Karen Wooley, the project's lead researcher. "Even back then, I was imagining particles that could be dispersed and sunk to the bottom, take in the sludge and float back to the top."

That's exactly what she made.

The design is based on iron oxide nanoparticles coated with a polymer -- a mixture of Styrofoam and the absorbent material in baby diapers -- that absorbs the crude oil. The polymer layer mixes with water to reach the oil below the surface. And although some water is absorbed, the nanoparticles still take in large amounts of oil. After soaking in the oil, the nanoparticles change color from light tan to black and float to the surface.

Since the iron oxide center is magnetic, a magnet waved over the surface can collect the swollen nanoparticles. The particles are washed with ethanol -- concentrated grain alcohol -- to remove the oil, leaving behind fresh nanoparticles that can be used again and again.

Researchers simulated the Deepwater Horizon spill to show that their system will work in real-world conditions. Crude oil is made of many different compounds, from long carbon chains such as the very flammable category of octanes to dangerous, carcinogenic rings such as benzene. Wooley's nanoparticles absorbed them all.

The nanoparticles are so small you can't see one with your unaided eye, but they can have a huge impact. Soaking up a barrel of crude oil, which is roughly 300 pounds, requires about 30 pounds of nanoparticles.

Still, applied to a 4.9 million barrel spill, the amount of nanoparticles needed would be dizzying. But if the majority of the oil were removed by traditional means, such as burning and skimming, the nanoparticles could handle the remainder.

"It's an interesting opportunity to think about how we can better respond next time," said Helen White, a chemist from Haverford College, in Pa., who studies the Deepwater Horizon spill but was not involved in this research. "In the future we can have more choices in terms of deciding what technology we can use to clean up the environment."

Researchers must resolve several practical questions before these magnetic nanoparticles are ready for real oil spills, from how much to release, to how waves might complicate recovering the swelled-up particles.

"That's the next step -- how to actually use this in the environment," White said.

The particles aren't expensive to make either. Wooley's team estimated that the price is comparable to current oil clean-up technology. The polymer and iron oxide cores are used for consumer applications, so mechanisms are already in place for large scale production of the starting materials. After that, the two pieces are mixed together in a solution and assemble into nanoparticles without additional intervention.

Although the particles are non-toxic -- similar systems are used for drug delivery -- they are not biodegradable. If any were left behind, they would float around the ocean indefinitely, possibly joining with existing islands of plastic garbage.

"If there are some particles that aren't captured and recovered, it may be better to have particles made of degradable polymers," Wooley said. Her group is looking into polymers made of natural products, such as sugar, that will dissolve into harmless components if left in the environment.

So what of the small droplets of crude oil sit at the bottom of the ocean, occasionally washing up on Gulf beaches? In this Wooley is confident: "If there is crude oil contamination then we have the potential to clean it up."

The research was published in the journal ACS Nano.

This story was provided by Inside Science News Service. Jenna Bilbrey is a freelance writer based in Athens, GA. She tweets at @JennaBilbrey.