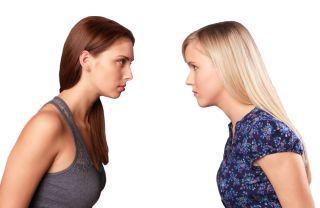 Competition among women may be partly driven by smells.
(Image: © Sanjay Deva | Shutterstock)

Just a whiff of a woman close to ovulation is enough to stimulate another woman's testosterone levels, along with her desire to compete.

Competition among women may be, in large part, nose-driven, as a new study finds that the scent of a woman close to ovulation triggers a testosterone boost in the smelling female.

Testosterone, in turn, can affect behavior.

"It's well known that testosterone is linked to aggression and competitiveness," lead author Jon Maner, a Florida State University psychologist, told Discovery News. "Based on our testosterone findings, one could speculate that women exposed to the scent of ovulation might become more antagonistic or competitive."

For the study, published in the latest issue of the journal Evolution and Human Behavior, Maner and co-author James McNulty measured the testosterone levels of women before and after they smelled t-shirts that were previously worn by other women aged 18-21. The latter group wore the shirts when they were at high fertility -- days 13, 14 and 15 of the menstrual cycle -- and at low fertility- days 20, 21 and 22.

Famous 'Other' Women in Politics: Photos

For the duration of the study, the t-shirt wearers refrained from engaging in sexual activity. They also showered with unscented soap and shampoo, did not use any perfumes or deodorants, didn’t smoke, and avoided eating odor-producing foods, such as garlic and asparagus.

The sniffers were told that the study concerned "how much we can tell about another person without even meeting them," but had no idea about how and when the t-shirts were collected.

Women exposed to the scent of high fertility females displayed greater levels of testosterone. The smell of a low fertility woman actually caused testosterone levels in the sniffers to significantly drop.

We are not consciously noting the smells of other people all day long, unless a particularly good or bad smell hits us, but odors are working on us, even when we don't realize it.

"Humans are influenced much more strongly by ovulatory cues than we tend to think," Maner explained. "For the most part, people aren't likely to be consciously aware of the effects ovulatory cues have over them. There is solid evidence that people find the scent of ovulation to be pleasant and attractive (relative to the scent of a woman who is far from ovulation), but beyond that, most of the behavioral and hormonal effects are likely to occur below the conscious radar."

Prior research found that men's testosterone levels are also sensitive to female ovulation. For example, in one of Maner's earlier studies, men who interacted with a female research assistant became more risk-taking and flirtatious when the assistant was in the high fertility stage of her menstrual cycle.

Such under-the-radar hormone dynamics might even influence what men and women wear.

"The research shows that there is something special about the color red in competition, and that it is associated with our underlying biological systems," Farrelly said.

In all cases, it appears that today's human social interactions can be driven by how we've evolved as primates.

"Some people might like to believe that people aren't animals, or at least that our behavior isn't beholden to the same biological processes as other species," Maner said.

"But humans," he added, "are very similar to other species in many ways, and those similarities are no more apparent than when it comes to sexuality."