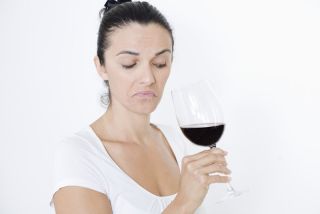 Wines that have been contaminated with a chemical found in cork often smell musty, like moldy newspaper.

A buttery flavor with notes of raspberries, chocolate and … wet dog?

Open enough bottles of wine, and eventually, one will smell a bit "off." Corked wines have been contaminated by a chemical carried in the cork that produces a musty, unpleasant smell often described as soggy cardboard or wet dog.

Now, researchers have found corked wine may smell so bad because the chemical culprit, rather than producing a yucky odor, actually suppresses the drinker's sense of smell.

"The present findings not only reveal a likely mechanism of flavor loss, but also suggest certain molecular structures as possible olfactory masking agents," the researchers write in their study, detailed today (Sept. 16) in the journal Proceedings of the National Academy of Sciences. [The 7 (Other) Flavors Humans May Taste]

The main chemical responsible for corked wine's off-putting smell is a chemical called 2,4,6-trichloroanisole (TCA). TCA infiltrates wine when a fungus that normally infects cork comes into contact with bleaches or chlorine products used in wineries for sanitation. Even tiny concentrations of the contaminant can cause the fungus to produce TCA — hence the foul, musty smell, often described as moldy newspaper.

After the cause of the smell was identified in the 1990s, many wineries removed chlorine products from their cleaning regimen.

Most researchers assumed that TCA produced chemicals that created the unpleasant odor.

To test that idea, Hiroko Takeuchi, a researcher at Osaka University in Japan, and her colleagues measured the electrical response of the nose's olfactory receptors to the presence of TCA in the lab.

Oddly, the TCA didn't seem to trigger any of the odor-sensing receptors in the cells. Instead, the chemical seemed to suppress the primary olfactory receptor, called the cyclic nucleotide-gated (CNG) channels, which play a key role in converting chemical smell signals into electrical signals.

The brain seems to interpret this smell-receptor suppression as an unpleasant odor for some reason, the researchers suspect.

And in a follow-up experiment, the researchers found that TCA was often found in foods and beverages that had lost some of their odor.

The findings imply that TCA works by reducing odor sensing, rather than by creating a bad smell, and that suppressing the sense of smell can somehow lead the brain to create a false impression of an off-putting smell.

"Based on these observations, we propose that the reduction of CNG channel activity may induce some kind of pseudo-olfactory sensation by inducing an off-response," the researchers wrote.

The results could have implications for scientists trying to develop odor-masking agents, the researchers added.

Editor's Note: This story was updated to note that Hiroko Takeuchi is a woman, not a man.