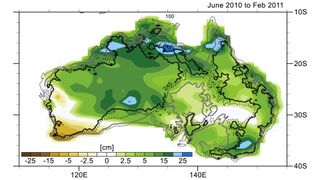 Changes in Australia's mass as reported by data from NASA's Gravity Recovery and Climate Experiment (GRACE) satellites from June 2010 to February 2011. Areas in greens and blues depict the greatest increases in mass, caused by excessive precipitation.
(Image: © NCAR/NASA/JPL-Caltech )

When rain falls on Australia's vast inland plains, the continent soaks up water like a sponge instead of sending surface runoff back out to sea via streams and rivers. For an 18-month period starting in early 2010, so much rain fell over Australia that global sea level rise temporarily slowed, according to a study published Aug. 12 in the journal Geophysical Research Letters. The oceans dropped by about 0.3 inches (7 millimeters), before resuming their steady shoreline climb in summer 2011, researchers report. Since 2011, sea levels have been rising at 0.4 inches (10 mm) per year.

The heavy rainfall and flooding in Australia resulted from the confluence of three climate patterns in three ocean basins. First, a La Niña in the eastern Pacific Ocean meant cooler surface waters, which shifted tropical rainfall over Southern Hemisphere continents. The La Niña combined with unusual atmospheric patterns over the Indian and Southern oceans to cause record rainfall in Australia, the researchers said in a statement.