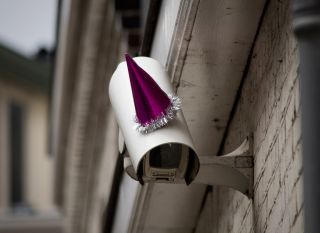 Famed author George Orwell was born on June 25, 1903, and two Dutch artists decided that the best way to celebrate his birthday was with party hats — on closed-circuit television (CCTV) cameras.

The duo, which calls itself FRONT404, created an impromptu art exhibit in Utrecht, Netherlands, by affixing a number of colorful party hats to neighborhood CCTV cameras. With surveillance technology all over the news and Orwell's dystopian novel "1984" proving eerily prophetic, combining a birthday party with government spying seemed apropos.

"By putting these happy party hats on the surveillance cameras, we don't just celebrate Orwell's birthday.By making these inconspicuous cameras that we ignore in our daily lives catch the eye again, we also create awareness of how many cameras really watch us nowadays, and that the surveillance state described by Orwell is getting closer and closer to reality," Thomas voor 't Hekke and Bas van Oerle, the two men behind FRONT404, wrote on the project's website.

Like many other European cities, Utrecht utilizes a series of surveillance cameras on walls and lampposts to monitor its citizens' activities. This is usually unobtrusive and can help reduce or solve crimes, but it also raises some very legitimate concerns about privacy and the morality of monitoring innocents.

For those who have not read Orwell's seminal "1984," the joke is apt. The novel tells the story of Winston Smith, a citizen of a totalitarian society called Oceania that has overtaken England, who works in a propaganda ministry. Oceania lives in a state of constant surveillance, which allows the government to eliminate subversives and craft whatever societal narratives it desires to serve as the truth.

The prank is especially salient in light of the U.S. National Security Agency's (NSA) recent activities in the United States. Without any prior objection from the Congressional Intelligence Committees or the White House, the NSA had been spying on private citizens' online activities and documenting their actions in an effort to root out potential threats to national security. [See also: 13 Security and Privacy Tips for the Truly Paranoid]

Even more Orwellian is that Edward Snowden, the man who brought the NSA's actions to the public's attention, has been castigated by the U.S. government as a potential traitor to the country.

George Orwell, whose real name was Eric Arthur Blair, was born in British-ruled India before emigrating to England with his family in the early 1900s. He served as an Imperial Policeman in Burma before returning to Europe, where he took up writing. Among other things, Orwell was both a socialist and a staunch opponent of socialism's potential pathways to totalitarianism.

It's good to know that Orwell's masterful works still endure and strike a chord with readers today, but they may be resonant for all the wrong reasons.