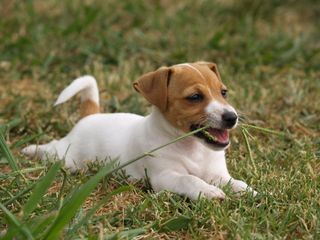 Most dog owners have probably seen their canine friend graze on grass at one point or another. A few theories exist to explain this seemingly odd behavior, though no answer is definitive.

The most common explanation for grass-eating is that it helps dogs purge their systems. Like humans, dogs can suffer from gastrointestinal issues including upset stomach, nausea, bloating and illness from pathogenic microbes.

If a dog is experiencing one of these problems, you may see it frantically wanting to get out of the house. Once out, it will chow down on any grass available, taking large bites and often swallowing the plants whole.

The grass causes gastric irritation that leads to vomiting, which helps the dog feel better afterward, the theory holds.

In a 2008 study in the journal Applied Animal Behaviour Science, researchers found that while grass consumption didn't often lead to vomiting, dogs that seemed ill before eating grass were more likely to vomit than dogs that appeared to act normally beforehand.

Another theory posits that dogs eat grass simply because they want to. In such cases, a dog may appear to hunt for a specific type of plant, rather than ingesting any grass it can find. After identifying the correct grass, it will calmly nibble on the plant.

In this scenario, the dog may even be seeking out grass to get additional nutrients it may not have in its normal diet, such as fiber, minerals or digestive enzymes. A 2007 case study in the Journal of Veterinary Medical Science reported that a switch to a high-fiber diet stopped a miniature poodle from regularly eating grass.

Wolves and other wild canids are known to regularly eat plant matter, suggesting dogs' grass-eating behavior is innate and perfectly normal. Indeed, a 2009 dog study in the Journal of Veterinary Behavior found that puppies were more likely to eat grass if their mothers did while nursing.