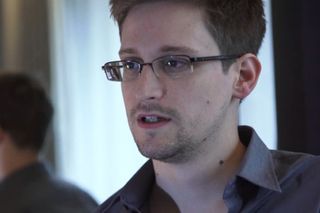 Edward Snowden, 29, spoke with the Guardian's Glenn Greenwald about his motives for leaking National Security Agency surveillance information in one of U.S history's biggest intelligence leaks.
(Image: © Screenshot, The Guardian)

Not only did Edward Snowden reveal a secret U.S. government spying program, but he also decided to reveal himself as the leaker. What kind of internal forces drive whistleblowers like Snowden? Is it just his own good conscience, as Snowden says, that led him to betray America’s most sensitive secrets, or perhaps something deeper?

Snowden’s bombshell has prompted an investigation by the U.S. Department of Justice and calls for his extradition from Hong Kong, where he was staying as of Monday morning, to face charges of espionage. Some intelligence experts have speculated that he is making a play for China, while officials at the National Security Agency are furious, according to news reports.

But Snowden -- a high school drop-out and ex-CIA employee -- also has his supporters. They say that he had no choice but to reveal the existence of a program he disagreed with and that threatened the civil liberties of law-abiding citizens.

Annie Machon is a former MI-5 intelligence officer who left after exposing secrets of the British Secret Service in 1997. Machon and her former partner fled Britain and lived in exile for several years as a result of the disclosures.

“Most people go into that line of work when they are quite young,” Machon said. “They like to have a job that makes a difference and saves lives. But after a few years, there’s often mistakes made and things go wrong. Then it flips into “how can I change this.’ ”

Machon said her decision to reveal secrets publicly was “terrifying” and she expects that Snowden is going through the same experience today.

“It’s just such a roller coaster,” Machon said from Germany, where she now works as a consultant and author. “You are doing something that you know is dangerous to yourself and your future prospects for a career. You also get incredibly paranoid. I knew for years that I couldn’t have a private conversation with my mother. That’s what is happening now with Edward Snowden.”

Snowden admitted Sunday that he was the source of news articles describing an NSA program that compiles cell phone, email and social media traffic of millions of U.S. citizens. The program, called PRISM, is supposedly designed to look for clues to terrorist activity here and abroad. Several members of Congress say they were briefed about the program, and President Barack Obama defended it Friday as necessary for national security.

But why didn’t Snowden just quit the agency after he found out about PRISM? Why did he remain in the CIA for several years, gather information about the spy program before planning his departure? Why did he agree to be named as the source, rather than try to live in obscurity?

One expert believes that there may be more to Snowden than just a spy-turned-do-gooder.

“These people have a problem with their personal boundaries,” said Bonnie Jacobson, a clinical psychologist in New York and author of six books on human behavior. “Even though they promise they won’t violate the rules, in a way they feel like they are the center of the universe and they are right and everyone else is wrong.”

Jacobson said that some people who violate secrecy -- whether legal or not -- could be diagnosed with something called borderline personality disorder, a condition in which people feel they have been “invalidated” or not taken seriously. This can lead to violent outbursts, such as road rage, for example, or a problem with obeying existing societal rules.

“It’s a deep character disorder from childhood where there wasn’t a successful mother-infant bond,” Jacobson said. “If the mother is solid and upbeat and says you’re cute, then the baby says I’m cute. It’s a reciprocal relationship. Most of the borderlines don’t have peaceful secure mothers. They never felt like they fully are here and exist on this earth.”

Snowden said he worried that his family, reported to be living in suburban Maryland, is at risk from CIA operatives. That’s why he agreed to identify himself as the source of the leaked material. Jacobson said she believes there are internal factors that also may have contributed to Snowden’s actions.

“There are always two sides to every reality,” she said. “When you think of someone like Martin Luther King, Jr., he felt he was right and others were wrong, but he didn’t operate on his own; he got a community to act with him. Snowden knew about the CIA before he joined. If he felt it was an organization that he couldn’t respect, he could have joined an organization that is working against that. He put the country at risk, that’s pretty violent.”

This story was originally published on Discovery News.