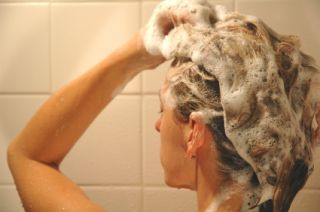 You don't need to shampoo daily. And the "no poo" movement suggests you don't do it at all. But if not washing your hair sounds flat-out gross, and yet you want to avoid some iffy chemicals, there are many all-natural shampoos. Image
(Image: © stockxpert)

Shampooing can be complicated. First, there are the convoluted instructions: Lather, rinse, repeat. It doesn't say anything about stopping. And now there's a movement afoot, called the "no poo" movement, advocating no shampooing whatsoever.

Shampoo is indeed a modern invention, as the no-poo'ers attest, developed roughly around the end of the 19th century. And few of us need to be shampooing every day, dermatologists say. That said, the necessity for shampoo varies from person to person, depending on your hair type and what you put in to your hair each day.

Forgoing shampooing completely, if that concept even appeals to you, ultimately could be rough on your hair and rougher on your social interactions.

The English word shampoo originated in India about 300 years ago and, at first, entailed a head massage with some fragrant oil. The practice likely dates back centuries before that. Shampooing in the modern sense, though, with water to produce a soapy lather, is only about 100 years old.

Prior to this, it is not as if all humans were just filthy. Shampooing, whatever it was called, involved adding a dry substance to the hair, such as a vegetable starch or wood ash, to absorb excess oil. Rainwater collected with wood ash, actually, provides a silky feel similar to modern conditioners.

The hair does get dirty. We secrete an oil called sebum to protect the protein structure of the hair, so that it doesn't splinter. But that same oil, unfortunately, tends to collect dirt and scalp flakes. With the dawn of modern chemistry, scientists developed surfactants to remove dirt efficiently while leaving a soft feel. Cosmetic companies salivated, and a million-dollar industry was born.

The poo in shampoo

The no-poo'ers raise a few valid concerns. Some shampoos, often the cheaper ones, contain potentially harmful chemicals that can be absorbed through the skin. These include sodium lauryl sulfate, sodium laureth sulfate, propylene or butylene glycol, isopropyl alcohol and coal tar.

Human studies aren't conclusive; most doctors and health agencies view these as generally safe. But animal studies suggest that, if you absorb enough, they ultimately might destroy your skin or other organs in some uncertain cancerous, cell-membrane-eating, DNA-unraveling kind of way, despite leaving you with luscious hair.

A common homemade alternative to shampoo is baking soda with a conditioning vinegar rinse. This is fine, but you'll smell like pickles.

There's really no good alternative other than to dilute the egg, vinegar, lemon or whatever other ingredient you might find in online recipes, or else smell like food. Many people will find that their hair doesn't feel or smell as good as it did when they used commercial products, but this is a social issue, not a health issue.

Fortunately, these days, there are so many all-natural shampoos that there's no reason to go poo-less. If you find them expensive, you can take the standard dermatologist's advice to wash just a few times a week.

Straight hair needs more washing in general than curly hair; and you might feel the need to shampoo every other day or more if you get sweaty each day or swim in a pool.

Not washing your hair won't harm you; the oil needs to stop building up after a few days once your body realized it doesn't need to generate any more. It's the no-poo'er reverse stance that modern shampoos are overtly harmful that's a bit overboard. You'd be making sacrifices with little reward other than the satisfaction of saving some money or saying no to the cosmetic industry.