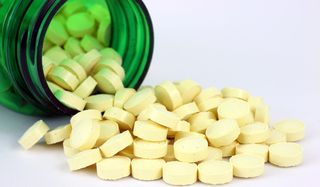 Folic acid supplements don't seem to make a difference when it comes to reducing the risk of heart disease and cancer, according to a new study.

Folic acid is known to affect blood levels of a protein building-block called homocysteine. Most people get homocysteine from eating meat, and its thought to be a risk factor for heart and blood vessel disease.

The new study showed, although taking folic acid supplements lowered homocysteine levels, it did not reduce a person's risk of of heart disease, cancer or death over a five-year period.

Researchers analyzed the results of eight previous trials that included 37,485 people studied over five years. Half of the people took folic acid supplements ranging from 0.8 milligrams to 40 milligrams every day, and the other half took a placebo, or in some studies, took a very small dose of folic acid.

In the group taking folic acid supplements, homocysteine levels decreased by 25 percent. However that group did not see any reduction in heart disease , stroke, cancer or death rates over the group taking the placebo.

Although the folic acid supplementation failed to demonstrate any positive effect on health as measured by this study, it didn't seem to have any negative or unsafe effects, either.

Folic acid is a B vitamin that helps the body to make new cells. Supplements are usually taken by people deficient in the vitamin to increase red blood cell count and ward off anemia, or by pregnant women to decrease the risk of birth defects, according to the National Institutes of Health.

A 2008 study in the American Journal of Obstetrics and Gynecology also found that folic acid supplements help reduce the risk of preeclampsia in pregnant women, a condition marked by high blood pressure and high levels of protein in the urine.

The new study was published today (Oct. 11) in the journal Archives of Internal Medicine.