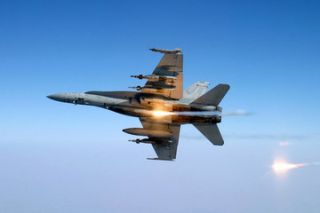 Despite reaching tremendous speeds, the X-43 only flies freely for about 10 seconds before crashing into the ocean (making it a very expensive single-use project).

The world's fastest propeller plane is the Russian-made Tupolev Tu-114, which has a maximum speed of 540 mph (869 kph). The Tupolev has held that record since 1960, even though another prop plane, the XF-84H Thunderscreech, was designed to fly at about 1,000 mph (1,609 kph). Unfortunately, the Thunderscreech didn’t actually work as planned due to its inherent instability.

While the Boeing 747 is supposedly the fastest of the big commercial jets, private jets tend to travel much faster. The Cessna Citation X, a private business jet that can carry up to seven passengers, has a top speed of 700 mph (1,127 kph).

In the future, a descendent of the Concorde may earn the title of fastest commercial plane. A prototype that could fly before 2020 is said to cruise at 1,350 mph (2,173 kph), or twice the speed of sound, whisking a dozen wealthy passengers from London to Sydney in a mere four hours.