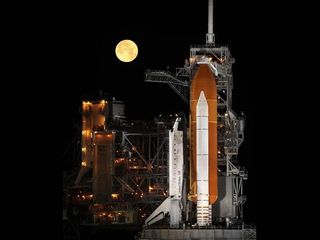 With Russia's Soyuz capsule temporarily grounded, there are no spacecraft available to give NASA astronauts a lift to and from the International Space Station, or anywhere else in space. So, what about the space shuttles? They were retired last July after 30 years of service, but in a pinch, is there any way they could be jump-started back into action?

According to Roger Launius, space history curator at the Smithsonian's National Air and Space Museum, which currently houses the Space Shuttle Enterprise (soon to be replaced with Discovery), the shuttles are firmly settled into retired life, and it would be prohibitively expensive to get them back off the ground. Allan Beutel, public affairs officer at the NASA Kennedy Space Center, adds that by the time the original space shuttles were back up and running, commercial companies in partnerships with NASA would have already built spacecraft able to fly to and from the ISS.

"Yes, you could get them back up if you wanted to, but the reality is the costs associated with preparing an orbiter for flight would be striking," Launius told Life's Little Mysteries. "It would be exceptionally expensive and a waste of money."

At the Smithsonian, Enterprise is housed in what is effectively a huge hangar with a door. Though there are exhibits standing between it and door, those could be removed if NASA wished to retrieve the shuttle. However, it would still be in no condition to fly. [8 Surprising Space Shuttle Facts]

First off, to make the shuttles safe for museum life upon their retirement, a number of parts had to be removed from them, Launius said. "In particular, there are parts of the propulsion system that use gases that are highly toxic, so those had to be removed. They had to purge the entire system of any gas, but since gas clings to parts of the system, such as the tubing and tanks, they often had to remove those items as well." Some of the parts could be replaced, while others were destroyed in the removal process and, because the shuttles weren't built with off-the-shelf parts, would have to be re-manufactured, Launius said.

And it isn't enough just getting the shuttle itself back up to snuff; to launch it, NASA would also have to rehabilitate the rest of the launch system, including the solid rocket boosters and external tanks. Though there are some rocket boosters left in existence, new external tanks were required for every shuttle launch. Getting fresh ones won't be easy: the assembly line where they used to be manufactured, the Michoud Assembly Facility near New Orleans has been totally repurposed since the shuttles' retirement. Workers there are now assembling a test model of the Orion spacecraft, NASA's next-generation craft which will eventually carry astronauts into deep space. (These parts are not compatible with the shuttle.)

There's also the matter of getting qualified people to put the shuttles back  together: shuttle technicians and staff have been laid off or shuffled to other departments since their retirement.

Considering all this, if there were some desperate need to get a space shuttle into space, how long would it take? Probably too long. Beutel estimates it would take several years to get a retired shuttle space-worthy.

Rather than undo all the changes, "our direction for getting to and from the ISS is to turn to commercial companies," Beutel said. These private space companies, such as Space Exploration Technologies (SpaceX),  are developing robotic vessels to carry cargo and supplies to the space station under NASA's Commercial Orbital Transportation Services Program. "We're on the verge of being able to do that," he said.  Eventually, SpaceX also plans to use a version of the capsule to carry astronauts and other paying customers to the space station, and is one of the contenders in the agency's Commercial Crew Development program.

The privatization of spacecraft building is the beginning of a brand new industry, Beutel said. As for the space shuttles, "the proverbial ship has sailed."